How Indian vigilantes are dealing with those caught urinating in public - MyJoyOnline.com

How Indian vigilantes are dealing with those caught urinating in public 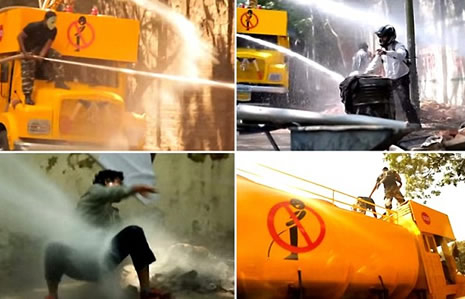 For those caught using the streets of Mumbai as a public toilet, the pavement is not the only thing to face getting wet.

Vigilantes have been patrolling the Indian city with a water tanker – and spraying anyone who urinates in public.

The vehicle, dubbed the 'P***ing Tanker', features a huge water canon, a logo of a person urinating and a large red sign, reading: 'You Stop, We Stop'. Action: Vigilantes have been patrolling Mumbai with a water tanker – and spraying anyone who pees in public

It also includes a large rooftop area, from which the masked vigilantes can blast unsuspecting members of the public with water.

The bright yellow tanker is believed to be the creation of an anonymous 'anti-public urination activist group', called the Clean Indian.

It aims to deter those who feel no shame relieving themselves in the streets of India's most populous city by turning the tables and 'taking a leak' on them.

It also hopes to combat the health risk of public urination – which the activists claim remains a major problem in the country – 'one spray at a time'. Soaked: The bright yellow tanker is believed to be the creation of an anonymous 'anti-public urination activist group', called the Clean Indian. Above, an Indian man caught urinating in the street is blasted by the vigilantes

The group has posted a video of the tanker at work on YouTube, with the caption: 'You wont' believe what we did to people using the outdoors as a toilet' (sic).

But the footage has divided opinion – with many users claiming that a lack of public toilets in the state of Maharashtra is the underlying problem, not those peeing in the street.

One user wrote: 'This is not the solution. Lack of availability of Public toilets is the problem that is causing general public to act like that.'

On the lookout: The footage has divided opinion, with many users saying a lack of public toilets is the problem

Meanwhile, another said: 'That's degrading for those men even if they are doing something wrong.'

But one woman wrote: 'Hilarious! The Clean Indian anti-public urination activists have a novel way of punishing men who p*** in public.'

And another added: 'This is a good way to teach them (public urinators) to use public toilets!'