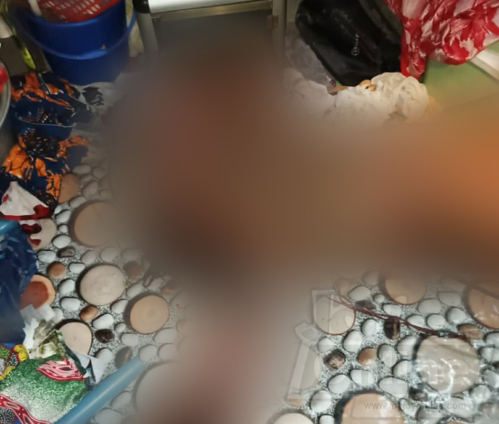 A 57-year-old man, Gideon Tetteh, has been arrested by officers at the Awutu Ofankor District Police Command for allegedly murdering his wife after having sex with her.

The unfortunate incident happened at Awutu Mankomeda in the Awutu Senya West District in the Central Region.

According to information, the deceased, Sabina Bonney, told her husband to use a condom for the sexual encounter to avoid pregnancy because they already have five children.

Reports say the man insisted on having sex unprotected.

The tension between the couple escalated, leading to the death of Sabina.

Speaking to Adom News, brother of the deceased, Isaac Aidoo stated that the neighbors of the couple did not know about the incident until the children of the deceased informed them.

“I asked the neighbors what happened and they said they didn’t hear anything. They said the children informed them about their mum lying down lifeless,” he explained.

Her body was found tied with a rope and lying in a pool of blood.

“The police were at the scene to take the corpse to the Police Hospital morgue in Accra,” Isaac added.