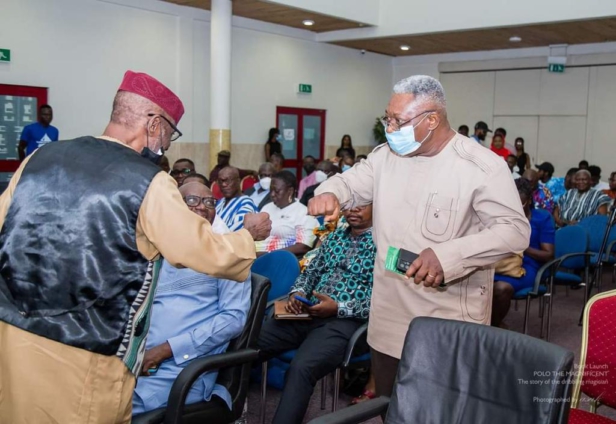 “The world is yet to see a more attractive footballer than the Nima-born football artiste. I doff my hat for Nii Odai Laryea” – Ken Bediako

In the days of yore, Ghanaian high-life musicians would insert into their songs, a testimony of individuals within the community who have done a cause or helped others.

Thus, the likes of Amakye Dede, Nana S.K. Ampadu, Abrikyiba Kofi Sammy, and Dr Paa Bobo all have songs in which they single out specific personalities for praise. Such good deeds are thus immortalised in song.

Actually, one highlife song – in the Burgher vein – was entirely themed on this idea of acknowledging the exemplary efforts of others. I am referring to Thomas Frempong’s Aye yi which extolled this virtue.

Of course, in today’s world of trending, dissing and self-marketing, the reverse is the case. The artiste turns the spotlight on self, mentioning his or her own name repeatedly in the course of a song to the extent that that itself becomes part of the melody.

For an Afro pop culture that is partly rooted in the rap movement of the late 1980s, braggadocio and self-glorification come with the territory.

In Ghanaian society, a more entrenched way of recognising the good deeds of individuals rests in our child naming systems. Naming of offspring, not necessarily along family line, also took care of this. We are familiar with the situation where an acquaintance would say: “My father named me after his first boss because of how good the man was.”

Then there are those who have the consideration to emboss the good works of others on vehicles. As a result, our various trotro carriers have become the moving platforms for such epitaphs. Sweet Sister, Akontapa, Good Father, Good Neighbour, Good Landlord (The last one is rather so rare, if you come across one, please let me know).

This article is about a virtue that is becoming uncommon in our society today – taking a genuine interest in an individual’s talent, investing in observing that talent grow and acknowledging it publicly. It is also about the extent to which certain individuals go to recognise others.

Ghanaian politician, Kwabena Agyapong recently caused a stir in sporting circles when he named The Dribbling Magician, Mohammed Polo as his all-time best footballer in Ghana. During a TV discussion on Good Evening Ghana, the former General Secretary of the New Patriotic Party placed Polo above Golden Boy Abdul Razak and The Maestro, Abedi Pele.

I do not aim to settle the debate that Agyapong’s rating would stoke. People have their heroes. I only wish to declare that the hero of this discussion is Nii Odai Anidaso Laryea. The gentleman is a project development practitioner who has a passion for soccer. His exemplary celebration of Mohammed Polo, one of Ghana’s sporting heroes is an achievement that the nation must take note of. As a secondary school boy of Prempeh College, Nii Odai had a holiday pastime of going to the Hearts of Oak grounds opposite the National Lotteries in Accra to watch their players train.

At the training ground during one holiday, he saw Mohammed Polo on the field for the first time.  Nii Odai’s life was to change from that moment. For an avid soccer fan who thought he had seen all the skills and flair that there was, Polo’s wizardry welcomed him into a world of globular leather magic.

For the rest of his life, he followed this Polo-mania so consistently, that Nii Odai has more facts about Polo’s play records than Polo himself. To top this passion all up, Nii Odai has written a book, Polo the Magnificent: The Story of the Dribbling Magician, which has just been published.

Also known as the ‘Soccer Wizard,’ Polo started playing in the 1970s when Africans going out to ply their trade in Europe was not a fad. Apart from his exploits for Hearts of Oak and the Black Stars, Polo also played in Gabon and the Gulf States. In the 1990s, he played again for Hearts, had a stint with Great Olympics and ended up as a coach.

With a career that spanned more than twenty years, Mohammed Ahmed Polo is easily the nation’s most decorated footballer. Former Graphic Sports Editor and Deputy Sports Minister, Joe Aggrey had this to say: “Some of us who were fortunate to watch this mercurial footballer from his early days till he blossomed into one of the country’s greatest stars, were all in agreement that he was and remains Ghana’s best ever.”

The Sports Writers Association of Ghana (SWAG) gave him the ‘Footballer of The Year’ award in 1974. As a matter of fact, he is the first player to have won that SWAG prize and perhaps the youngest as well.

Polo had a way of adding a touch of class to spice up the game any time he was on the field of play. The Dribbling Magician himself calls his skilful, playful style ‘Agoro,’ the Ghanaian version of Spain’s ‘Tiki-Taka.’ To Nii Odai, the player was to football what Muhammad Ali was to boxing. In his estimation, Mohammed Polo is the best player the world ever had; perhaps only challenged by Maradona. The author goes on to demonstrate this postulation in a comprehensively developed matrix that is verifiable.

The book also takes the reader back to the days of yore and helps in recollecting the ‘good old days’ of the 1970s and 1980s when Ghana could boast a good number of quality soccer stars.

Polo’s exploits on the field became a headache for some sports journalists – an occupational hazard. Some got into trouble more than once. The following is veteran sportswriter Ken Bediako’s own confession.

“I recall the famous ‘Miracle of El Wak’ in 1977 when Hearts of Oak had to conjure three amazing goals in the second half to beat visiting Mufulira Wanderers of Zambia to erase a 5-2 defeat in an Africa Cup semi-final second leg. My excitement and desire to paint an exceptionally vivid picture of Polo’s contribution to Hearts’ success that day took me an unusually long time to finish writing the story. I had to change my introduction several times until my senior colleague, the late Yaw Boakye Ofori Atta, drew my attention to the fact that my fanaticism for Polo was delaying production, amidst laughter from my colleagues.”

In the analyses submitted in the book, Nii Odai is matter-of-fact, however, the passion of an admirer-extraordinaire comes to the fore once in a while. One cannot fault him for this. The soccer story of Polo is a tale of flair. Who, in describing such a gem would not ooze some flair? But above all, the writer stays faithful to the reputation of a player whose skill has brought meaning and joy to many.

What I like most about his publication on Polo is that the author deployed sufficient peer consultation. Nii Odai engaged former key players, coaches and sports analysts to provide their own assessment of Mohammed Polo.

Indeed, flipping through Polo the Magnificent: The Story of the Dribbling Magician, feels like a nicely composed highlife tune with a melodious ayekoo chorus to all those who have done good deeds for our Mother Ghana.

DISCLAIMER: The Views, Comments, Opinions, Contributions and Statements made by Readers and Contributors on this platform do not necessarily represent the views or policy of Multimedia Group Limited.
Tags:
Mohammed Polo
Nii Odai