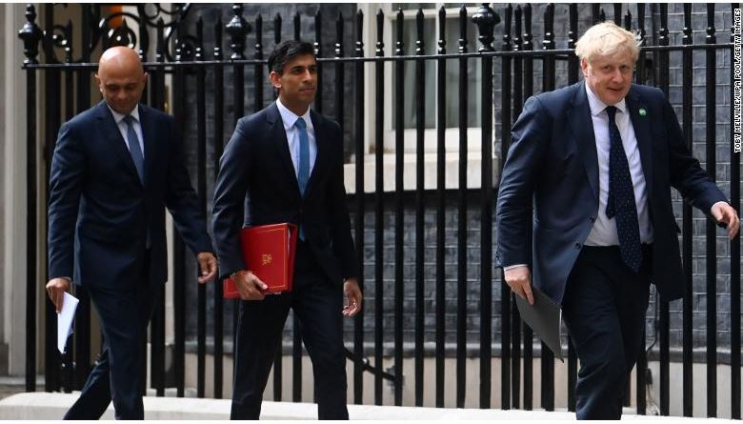 British Prime Minister Boris Johnson was dealt a huge blow on Tuesday when two of his top ministers announced their resignations, saying they could no longer work for a government mired in scandal.

Chancellor Rishi Sunak and Sajid Javid both announced they were quitting in letters posted to Twitter within minutes of each other on Tuesday evening.

The most immediate controversy facing Johnson is Downing Street’s handling of last week’s resignation of deputy chief whip Chris Pincher, who stepped down from his post last Thursday amid allegations he had groped two guests at a private dinner the night before. While he did not admit the allegations directly, Pincher said in a letter to Johnson that “last night I drank far too much” and “embarrassed myself and other people.”

“The public rightly expect government to be conducted properly, competently and seriously,” Sunak said in his resignation letter. “I recognise this may be my last ministerial job, but I believe these standards are worth fighting for and that is why I am resigning.”

“In preparation for our proposed joint speech on the economy next week, it has become clear to me that our approaches are fundamentally too different,” Sunak added in the letter. “I am sad to be leaving Government but I have reluctantly come to the conclusion that we cannot continue like this.”

Javid wrote that “it has been an enormous privilege to serve in this role, but I regret that I can no longer continue in good conscience.” Javid added that the vote of confidence in the prime minister last month “was a moment for humility, grip and new direction.”

“I regret to say, however, that it is clear to me that this situation will not change under your leadership — and you have therefore lost my confidence too,” Javid wrote.

Downing Street has struggled to explain why Pincher was in government in the first place, amid a wave of revelations about his previous alleged conduct.

When those reports emerged, Downing Street initially denied the Prime Minister knew anything specific about them. Then, Johnson’s team said he had known about the historical allegations, but that they had been “resolved.” When it emerged that one of the previously unreported allegations against Pincher had been upheld, Johnson’s spokesperson explained that “resolved” could mean that it had been upheld.

Then on Tuesday morning, Simon McDonald, the former top civil servant at the Foreign Office, revealed that Johnson had been briefed in person about the outcome of an investigation into Pincher’s conduct.

Minutes before Sunak and Javid announced their resignations, Johnson acknowledged it “was a mistake” to appoint Pincher to his government.

For months Johnson has been facing a barrage of criticism over his conduct and that of his government, including illegal, lockdown-breaking parties thrown in his Downing Street offices for which he and others were fined.

Last month, he survived a confidence vote, but the final count of his lawmakers who rebelled against him was higher than his supporters expected: 41% of his own parliamentary party refused to back him.

But while he managed to win the confidence vote, he suffered a further blow late last month when his party lost two parliamentary by-elections in a single night, raising new questions about his leadership.

According to an Ipsos UK survey conducted between 22-29th June, Johnson’s Conservative Party is at its lowest level recorded in more than a decade when it comes to being seen as “fit to govern”.

Just 21% of respondents said it is fit to govern — the lowest number for either the Conservatives or Labour since Ipsos started tracking this metric in 2011.

Javid and Sunak were not the only ones to go on Tuesday.

Shortly the two quit their jobs, Conservative party vice chair Bim Afolami announced live on television that he too was resigning.

During an interview with The News Desk’s Tom Newton Dunn, Afolami said: “I just don’t think the Prime Minister any longer has my support… the support of the party or indeed the country anymore.”

Afolami called for Johnson to step down and then said he would also give his own resignation. “I think you have to resign because I can’t serve under the Prime Minister.”