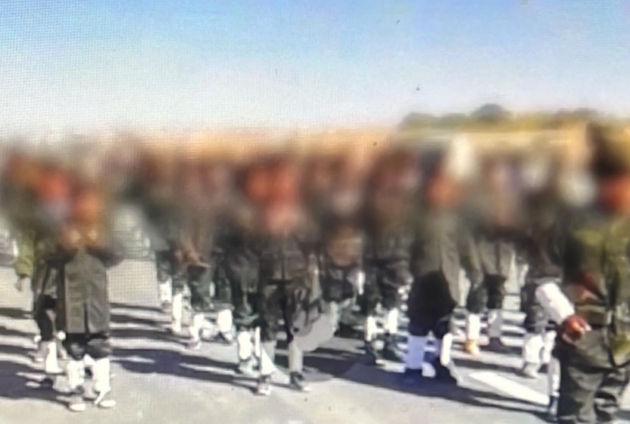 Africa Culture International, an NGO has called on Algeria to urgently take steps to put an end to the use of children in military operations and their recruitment on its own territory.

The group said despite numerous press articles supported by video recordings and photos – the authenticity of which has been confirmed by the United Nations and the European Parliament – showing children from the Tinduf camps dressed in military uniforms and participating in a military parade for the Polisario Front militias, Algeria has not been able to protect the children from joining the militia.

In a press statement after the 49th session of the Human Rights Council, the NGO “Africa Culture International” organised a panel in association with several civil society actors from the Moroccan Southern Provinces participating in the session and present in Geneva, an international conference on the recruitment of Sahrawi children in the Tinduf camps: analysis and testimonies.”

The panel condemned and expressed growing concern about the violations committed against children in the Tinduf camps and the forced recruitment into the ranks of the militias.

The NGO further called for the immediate release of all enlisted children and for the accountability of any State or terrorist organisation that provides the Polisario with weapons and incites the Polisario to carry them.

“We urge independent international governmental and non-governmental organisations to explore ways and measures to protect the children forced to bear arms in the Tinduf camps and to diagnose the psychological state of these children in order to provide them with protection; Finally, we call on the international community and all UN mechanisms and those established under the Charter to publicly denounce the exploitation and recruitment of these children.”

According to the NGOs, the exploitation of children by the Polisario, by forcing them to bear arms and subjecting them to sanctions in case of refusal to appear and to comply with military orders, was contrary to International Humanitarian Law and is considered a crime against humanity, because of the psychological and physical harm inflicted on children and their families.

President of the OSPDH, Ms. Aicha Duihi pointed out in her intervention that the indoctrination and enlistment of children by the Polisario in wars is a crime against human beings in general.

This practice contradicts the principles of human rights and the requirements of the Convention on the Rights of the Child, which stipulates education in the principles and values of freedom, equality and tolerance in a manner aimed at consolidating the personality of the child.

She specified that the phenomenon of child soldiers in the Tinduf camps constitutes a danger for the entire North African region. In this sense, she explained that these children could easily be recruited by terrorist organisations in the Sahel.

Ms. Aicha Duihi called on the international community to adopt serious measures to deal with this phenomenon.

President of the CIDH, Mr. Moulay Lahcen Naji on his part stressed in his speech that the organisation of this conference around the theme of child soldiers puts the focus on a complex and particularly touching subject, as long as it is a phenomenon that affects the rights of the child.

In this sense, he insisted on the fact that the war situations in Africa and more particularly in North Africa favor the phenomenon of the recruitment of children by the armed militias of the Polisario in the Tinduf camps on Algerian soil.

According to Mr. Naji, this is a serious violation of the rights of the child and of the human being in general.

In this regard, he invited the AU and the AU Peace and Security Council to assume its responsibilities regarding the phenomenon of the recruitment of children by the Polisario, which constitutes a serious violation of all the UN resolutions on the Rights of the child.

Mr. Naji, Moroccan civil society actor, further denounced the abuses committed by the Polisario and particularly the enforced disappearance by citing cases and calling for the fate of Ahmed Khalil said Carlos to be clarified.

Mr. Abdelaouahab Gain Brahim, University Professor and President of AIPECT underlined that the subject of child soldiers in the Tinduf camps challenges us, as civil society, because it is a serious violation of the rights of the child cited in the UN mechanisms of the right of the child.

He explained that Algeria, the host country of the Tinduf camps, is an undemocratic country run by Generals who do not recognise the principles and UN conventions relating to the protection of children’s rights.

Since 2012, Algeria has not presented any report on the protection of children on its soil. Mr. Abdelaouahab Gain Brahim invited civil society and the international community to work to strengthen the monitoring of the situation of children in the world and particularly in the Tinduf camps.

Mr. Said Achmir, he pointed out that the Polisario front began to indoctrinate and engage children in wars decades ago, with the adoption of a pre-established training program. He cited, in this regard, the report published by the Spanish newspaper “Tribuna Libre” in 2020 on child soldiers in the Tinduf camps and the military training to which they are subject in Cuba.

Mr. Achmir specified that the case of child soldiers in the Tinduf camps is a responsibility of Algeria which must be seized by the UN Human Rights mechanisms on this matter as a host country of the Tinduf camps, and as a country (blind witness) that has ratified the African Charter on the Rights of the Child and Peoples.

President of the LSDDH, Mr. Hamada Labbihi said in his intervention that he will speak as someone who has lived in the Tinduf camps for a long time.

He assured that he was sent to Cuba at the age of 9 where he was indoctrinated and forced to carry and handle weapons.

He said the fate of the child within any armed militia was the same. This one being marked by indoctrination and abuse of all kinds, adding that about 20% of the Polisario fighters were under 16 years old.

Mr. Labbihi stressed that the international community does not recognise the Polisario, and therefore all responsibility for the indoctrination and practices suffered by children in the Tinduf camps remains the responsibility of Algeria.

Also, Moroccan civil society actors during the General Debate relating to the Protection and the Promotion of Human Rights denounced the enlistment of child soldiers within the Polisario militias.

Sahrawi associative activist and President of the New Generation Foundation, Mrs. Nour Bouhanana reiterated that the human rights violations denounced by calling for an international mobilisation to fight against the enlistment of Sahrawi children within the armed militias of the Polisario.

DISCLAIMER: The Views, Comments, Opinions, Contributions and Statements made by Readers and Contributors on this platform do not necessarily represent the views or policy of Multimedia Group Limited.
Tags:
Africa Culture International
Algeria
Human Rights Council