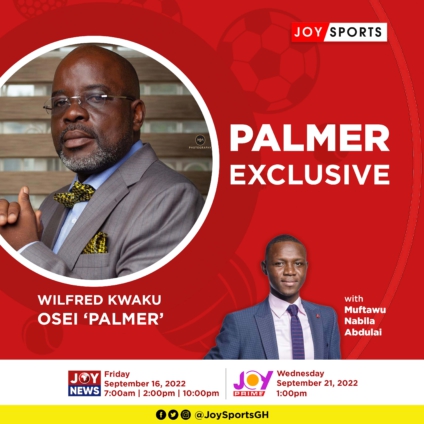 A former Executive Council member of the Ghana Football Association (GFA), Wilfred Kwaku Osei aka, has advised the president of the association, Kurt Okraku, to be humble.

In a yet-to-be televised interview with Joy Sports, the 2019 GFA Presidential aspirant affectionately called Palmer alleged Mr Okraku has vowed not to clear him to enable him to contest future FA elections.

“I am hearing he [Kurt] says he will not clear me,” Palmer began. “Whenever I am told that he says he won’t clear me to contest future elections, I tell them to go back and tell him my eligibility to contest FA elections [in the future] is not dependent on him,” he stated.

Palmer was disqualified from contesting the 2019 GFA elections by the Normalisation committee headed by Kofi Amoah over his decision not to pay 10% of the transfer fee of Tema Youth’s former players Joseph Paintsil and Gabriel Larveh.

The elections committee also noted that comments he made in a radio interview in November 2018 about Ghana’s failure to qualify for the Russia World Cup were in a bad taste and connoted inducing officials to win matches.

This argument convinced the Court of Arbitration for Sports, the apex sports adjudicatory body that upheld the disqualification of Palmer after he appealed in their court.

However, the Tema Youth owner in a say-it-all interview insists the CAS’s decision did not state that he cannot contest future elections.

“Can you point to any part of the report that suggests or implicates me that I cannot contest future elections?” he quizzed before adding that “saying he will never clear me is raising himself too much, he should lower himself,” he advised.

It will also be broadcast on Joy Prime on Wednesday, September 21, 2022, at 1 p.m after the Midday News.