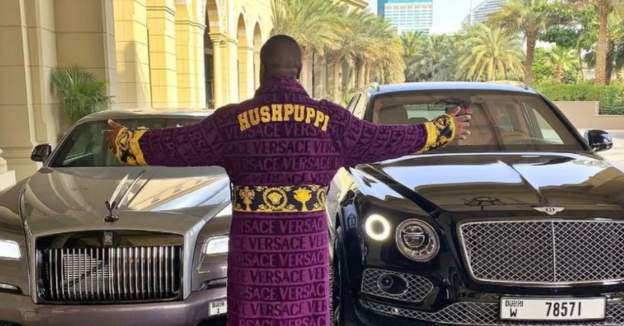 Hushpuppi flaunted his extravagant lifestyle to his millions of followers

Instagram has told the BBC that they deactivated the account of the Nigerian influencer and high profile international fraudster, Hushpuppi, because he broke their rules on fraud.

“We don’t want anyone to use our apps to defraud or exploit people, and have clear rules against fraudulent activity – including money laundering,” a spokesperson from Meta, which owns Instagram, said in a statement.

“We disabled @hushpuppi’s account for breaking these rules,” the statement continued.

Hushpuppi, whose real name is Ramon Abbas, used to post luxurious images on his Instagram, displaying his expensive lifestyle to his 2.8 million followers.

But that luxury lifestyle came to an abrupt end after he was arrested in Dubai, where he lived, in June 2020.

Less than a year later, he pleaded guilty to money laundering in a US court and is considered to be one of the world’s most high-profile fraudsters, according to the FBI.

Unsealed court documents showed that in his last plot, he tried to to steal more than $1.1m ($960m) from someone who wanted to build a school in Qatar.

He had a network all over the world, with some of his schemes spreading from Malta to Mexico.

Documents filed in California say that his’ crimes cost nearly $24m, and he now faces a potential 20 year jail sentence.

Despite Hushpuppi’s guilty plea last year, Instagram had not taken down his account at the time, saying they had investigated and decided not to close it.

The current deactivation of his account was first picked up by Nigerian media on Sunday.

Meta’s rules on fraud says they try to “prevent fraudulent activity that can harm people or businesses”.

DISCLAIMER: The Views, Comments, Opinions, Contributions and Statements made by Readers and Contributors on this platform do not necessarily represent the views or policy of Multimedia Group Limited.
Tags:
Hushpuppi
Instagram