I am unhappy with JS Saoura result - Samuel Boadu - MyJoyOnline.com

I am unhappy with JS Saoura result – Samuel Boadu 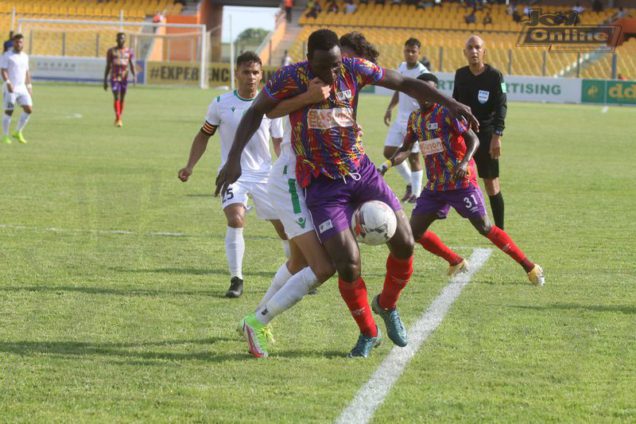 Head coach of Accra Hearts of Oak, Samuel Boadu, has expressed his dissatisfaction with the scoreline from his side’s win against JS Saoura in the play-off of the CAF Confederations Cup at the Accra Sports Stadium on Sunday.

The Phobians beat the Algerian side with a 2-0 scoreline, with Salifu Ibrahim and substitute, Isaac Agyenim Boateng hitting the back of the net.

Despite what may seem a good win for the reigning Ghana Premier League champions, Boadu says the two goals were not enough for him considering the dominating performance of his team.

“I am not happy at all with the scoreline, because we should have scored more than just two goals,” Boadu said when quizzed about his view on the result of the game.

“We created a lot of chances and we scored just two goals.”

Daniel Afriyie-Barnieh and Kofi Kordzi had opportunities to score to extend the team’s lead but couldn’t utilise the opportunities that came their way.

Boadu was seen having a heated conversation with his number 9 after giving the ball away cheaply in the opposition’s half, something that didn’t go too well with his coach.

Asked about the conversation with Kordzi, Boadu added: “It wasn’t an exchange [of words]. I just wanted to prompt him for a certain mistake he did on the pitch.”

Hearts will be hoping to make it to the group stage of the competition having taken a two-goal advantage ahead of the return leg in Algeria.