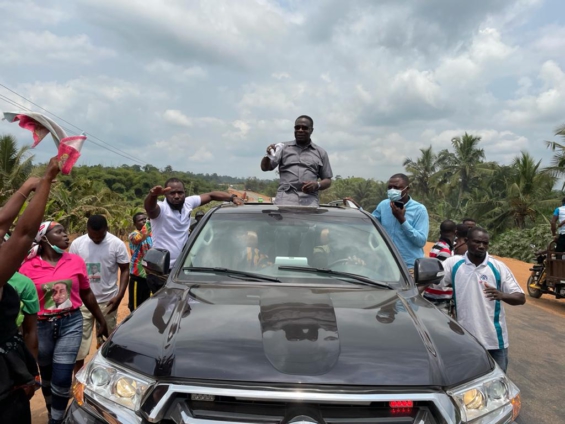 Mr Gyaakye Quayson paid a visit to the people of Assin North on Monday, August 5.

The embattled former Assin North MP, Joe Gyakye Quayson, has told the people of the constituency that he remains their legislator despite a High Court ruling that states otherwise.

According to him, he disagrees with the judgment pronounced by the Cape Coast High Court. Joe Gyakye Quayson maintained that he won the election fair and square.

“I am still your Member of Parliament,” he told a cheering crowd of constituents during a visit on Monday.

Mr Quayson said he respects the law and thus has filed an appeal to have the court’s decision cancelled.

The embattled former legislator who compared himself to Kwame Nkrumah and Nelson Mandela said that he only wants to help the people of Assin North and improve on their standard of living.

He called for the support of the people while he embarks on the journey to get himself reinstalled as the MP.

The Court, presided over by Justice Kwasi Boakye, ordered for a new election to be conducted in the Constituency.

The case of the petitioner was that the MP at the time of filing to contest the 2020 Parliamentary Elections, had not renounced his Canadian citizenship and thus held dual nationality.

On Monday, August 2, the lawyers for Mr Quayson have filed a Notice of Appeal in Cape Coast.

According to the lawyers, the decision of the Cape Coast High Court was not based on settled laws and was in clear violation of the 1992 constitution.

They want the appeals court to overturn the decision of the High Court.

Meanwhile, National Youth Organiser for the New Patriotic Party (NPP) says he is surprised Mr Quayson is still holding himself as an MP.

According to him, although the former Assin North MP has filed an appeal he has not filed for a stay of execution to temporarily suspend the enforcement of the court judgment.

“An appeal does not operate as a stay of execution, so, I am surprised how he could still hold himself up with such boldness and declare he is still the MP,” Nana Boakye said on Joy FM’s Top Story.

However, the National Communications Officer for the National Democratic Congress, Sammy Gyamfi, says the party will also file a stay of execution following the appeal.

Also speaking on Top Story, he said, “for me what is important is the grounds for the appeal which borders on fundamental issues of law that we will want the media and the nation at large to follow keenly.”

“Because, this is a matter that affects not only those of us in Ghana today, but even Ghanaians in the diaspora and we we will want our superior court to interpret the law in a way that ensures justice is done.”