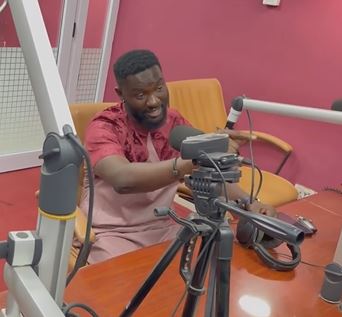 Kissing in movie scenes isn’t something new for actors.

However, over the years, many actors have complained about the unwelcoming mouth odour of their co-actors.

To not fall prey to this, actor, Anthony Woode decided to do everything in his capacity to have a fresh breath.

In an interview on Pluzz FM, the relatively new actor revealed that in the upcoming film; ‘Fifty Fifty’, he was expected to kiss actress, Yvonne Nelson.

In anticipation of the kiss, he brushed his teeth several times to rid himself of any unpleasant odour before shooting that scene.

“When we were shooting the film, before we went on set, I read the script and I had to kiss Yvonne nelson. Before I shot that scene I had to brush my teeth about five times,” he said.

This comes months after Yvonne Nelson urged her colleagues to take their personal hygiene seriously.

In February, she had revealed that she has declined to kiss co-actors on numerous occasions because of mouth odour.

In an interview on Daybreak Hitz on Hitz FM, Yvonne Nelson said “it is sometimes bad and very annoying. I believe as an actor you need to respect yourself and people you work with so personal hygiene should be number one.”

Meanwhile, talking about the film, Anthony said he was grateful to Yvonne for casting him as a lead in the new film that has actors John Dumelo and Majid Michel.

He said it is an opportunity for him to be recognised in the industry and he is appreciative of that.

DISCLAIMER: The Views, Comments, Opinions, Contributions and Statements made by Readers and Contributors on this platform do not necessarily represent the views or policy of Multimedia Group Limited.
Tags:
Anthony Woode
Brushing
Yvonne Nelson