I carried the cross for my family, it must end with me – Breast cancer survivor 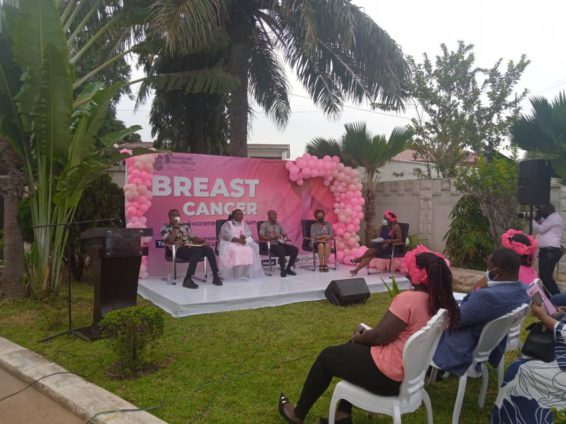 When Susan Malik was first diagnosed with breast cancer in May 2019, one thing was certain, that she was not going to let the disease get the better of her.

Coming from a family with a cancer history, Mrs Malik opined that she went to the hospital mentally prepared when she noticed an abnormality with her breast.

After being diagnosed with stage three cancer of the breast, the travel consultant said she was unperturbed.

She believed that considering the alien which had intruded her body a danger meant she was throwing in the towel even before the battle began.

“When I was diagnosed with breast cancer, I decided that ‘we are going to fight and I must win’. So I didn’t allow worry to eat me up,” she told participants of a Breast Cancer Awareness Symposium organised by Danquah Institute on Tuesday.

Studies show that the average time between when people see an abnormality in their breast and when they report it to the hospital is about eight months.

But Mrs Malik reported to the hospital a month after she started experiencing pains in her breast.

She mentioned that with her family history, she did not undermine any irregularity that she experienced in her body.

“So if I allowed it to defeat me, then it will continue to eat up people in the family” she added.

According to a Senior Lecturer with the Department of Surgery at the University Ghana, about 80 per cent of persons diagnosed with breast cancer in the country are in stage three or four.

Dr Florence Dedey explained at the symposium that the findings are worrying.

She said that the delays in reporting cases make the cancerous cells spread, therefore, making it difficult to cure.

“One thing about breast cancer is that when it is detected early and treated effectively that is when it can be cured. When you don’t detect it early the chance of having a cure is reduced significantly,” she stressed.

The treatment journey was not an easy voyage. But like a warrior, Mrs Malik was willing to “secure peace only by preparing for war.” – John F. Kennedy.

She may have been mentally strong and not willing to succumb to the disease but the radiation and chemotherapy had their effects.

Recounting some parts of the turbulent journey, she said she lost her hair and became skinny.

However, that didn’t deter her from forging forward. The light at the end of the tunnel was her target and her determined spirit was willing to crawl to it – if that is what it would take.

“The doctor said ‘we have to cut both breasts, I said ‘if it is three, I will want to get those things off,’” she narrated.

But giving reasons for the hair fallout, a surgeon at Korle-Bu Teaching Hospital, Dr Nelson Agboadoy said it is an effect of the chemotherapy.

He explained the chemical substance acts on cells that divide very fast, thus, in the process of attacking the cancer cells, other cells like those of the hair are affected.

Considering the astounding figures of patients that report to the hospital with stage four cancer, a former Deputy Health Minister called for a policy to avert the situation.

Dr Bernard Okoe Boye, taking his turn at the symposium, said laws must be enacted and implemented to regularise breast screening.

He insisted that the normalisation of breast examination will ensure that persons with cancerous cells are detected early for treatment.

“We must advocate. The more noise we make, the more we force policymakers to sit down and review what is on the table. Preventive care is the only way to solve this serious issue,” he opined.

Dr Okoe Boye, therefore suggested that “before a woman gets registered to be on a payroll, one of the requirements is to know when last they went for breast screening.”

“Until we attach breast cancer results or examination results to proceedings that are normal, some people will not still yield,” he added.

After being to the “butchering” room and back, Mrs Malik does not wish what she has been through on anybody.

For this reason, she has set up a Non-Governmental Organisation (NGO) to increase sensitisation and advocacy in the country.

With MaudLoko Breast Cancer Foundation, Mrs Malik hopes to change the fortunes of many others.

DISCLAIMER: The Views, Comments, Opinions, Contributions and Statements made by Readers and Contributors on this platform do not necessarily represent the views or policy of Multimedia Group Limited.
Tags:
Breast cancer
Dr. Bernard Okoe Boye
Surviving breast cancer
Susan Malik