I could step down but not yet – Pope Francis 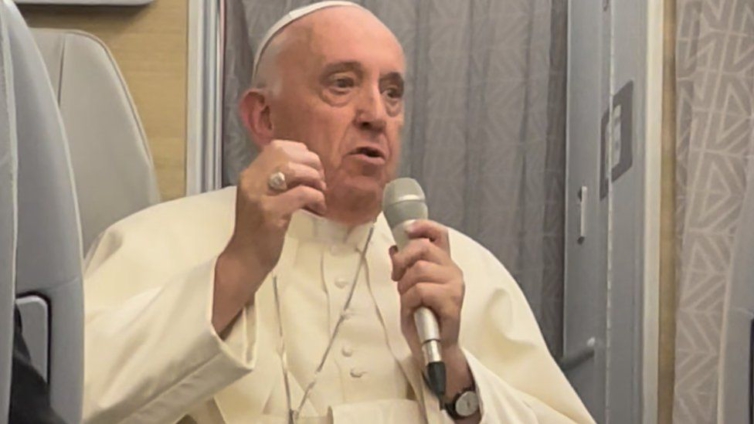 Pope Francis has said the time may soon come when he needs to consider stepping down – and would do so if he felt his health meant that could not serve in the way he should.

He made the comments at the end of a trip to Canada – where he apologised to indigenous people – which involved extensive travel and long days.

The 85-year-old pontiff stressed that for the moment he intends to continue in his duties – and will be guided by God as to when he will step down, if he steps down at all.

“It is not a catastrophe to change Pope, it is not a taboo,” he told journalists from a wheelchair on the plane from Canada’s Arctic territory to Rome.

“The door [to retiring] is open – it is a normal option. But until today I have not knocked on that door. I have not felt the need to think about this possibility – that is not to say that in two days’ time I might not start thinking about it.”

Over recent months Pope Francis has suffered ongoing knee trouble that has impacted his mobility. He spent much of his visit to Canada in a wheelchair.

But he has previously dismissed speculation about more serious, life-threatening illnesses.

“This trip has been intense,” he said. “I don’t think I can keep travelling with the same rhythm I used to at my age and with the limitation of this knee.

“I either need to save myself a little in order to continue serving the Church, or I need to consider the possibility of stepping aside.”

The Pope – whose predecessor Benedict XVI retired due to ill health in 2013 – did say that he was keen to visit Ukraine soon, but would have to seek advice of his doctors first.

On his visit to Canada, his sombre focus had been to apologise to indigenous people of the region for the wrongs committed against them by those within the Catholic Church.

The Pope appeared most engaged in his interactions with local people – particularly survivors of abuse at Catholic schools.

But there were times during some of the formal proceedings with politicians that his tiredness on a busy trip looked obvious.

He spoke to journalists on the plane back about a range of topics and became animated in his criticism of so called “traditionalists” in the Church – as it happens, those most likely to welcome a change in pontiff.

“Many people who call themselves traditionalists, they are not, they just go backwards. That is a sin.

DISCLAIMER: The Views, Comments, Opinions, Contributions and Statements made by Readers and Contributors on this platform do not necessarily represent the views or policy of Multimedia Group Limited.
Tags:
Health conditions
Pope Francis