I had always been Black Sherif’s manager, Snap Chavis Wayne was a financier – Madona - MyJoyOnline.com

I had always been Black Sherif’s manager, Snap Chavis Wayne was a financier – Madona 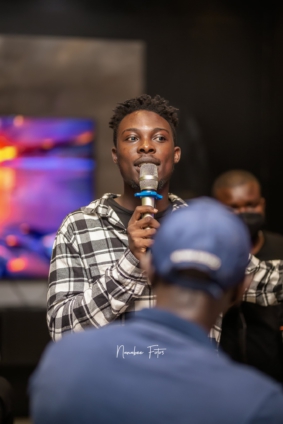 Rumor was rife that one of Ghana’s new sensational artistes, Black Sherif, has abandoned his manager, Snap Chavis Wayne, to sign a contract with EMPIRE Entertainment, a foreign based record label located in the U.S. This allegation was made by one DJ Slim who accused Black Sherif of being an ingrate. DJ Slim alleged that the artiste had abandoned a 7-bedroom house, a car and other personal items his manager as made available to him for his personal use.

In a rather bizarre turn of events, another gentleman known as Madona has diffused this allegation made by DJ Slim, stating emphatically that he has always been the manager of Black Sherif before he became famous.

In an interview with Prince “Da Don” Tsegah on U Say Weytin on Hitz FM, Madonna was asked to clear the air on the position Snap assumed in Black Sherif’s team and the role Madonna played in the same establishment.

In his response, Madona averred that the rapper had not abandoned his management as peddled about in the media. He declared that he has been Blacko‘s manager from day one and has taken all business decisions on behalf of the artiste till date, and the media knows.

“Da Don, if you know me very well… and you listen to Black Sherif very well, you would know. The media knows. Ghana knows how Black Sherif shot to fame. Every media house that has spoken to me; every business deal goes through me. I am the one who always answers the call. Blacko getting to the top has been my handiwork and the boys working it out to how far it has gotten to,” he said.

Madona also revealed that Snap only came into the picture after ‘Second Sermon’ was shot and released.

“Snap was a financier. His job was to bring in the money for us to do the job. However, he came in after Second Sermon. In fact, we were already doing the job before he came. We didn’t even know him before the single was released,” Madona added.

Prior to this, it was alleged that Black Sherif had packed out of Snap’s house after gaining fame and realizing that he no longer needed his support although he financed his recordings and day-to-day activities.

Fortunately, it seems as if the media back and forth has not succeeded in distracting Blacko from dropping more bangers. He is expected to release another single before the EP is released within the first quarter of 2022.

In the meantime, his most anticipated collaboration, “Always”, with Darkoo, a Ghanaian-UK based artiste, is finally out. It has recorded 455,000 views on YouTube two days after its release. The video was directed by Babs Direction.