I lost my mother over 2 decades ago, and I’ll never be able to get over it 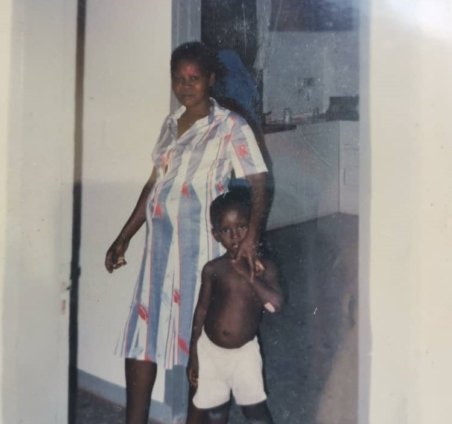 Ziem and his mother

“My two brothers and myself were brought up by relatives. My uncles took care of us. It was difficult. You know how orphans are treated in our culture. Sometimes, I was denied food as a punishment for offenses I didn’t commit. But I survived by the Grace of God.”

How 36-year-old Joseph Ziem describes the hardships he faced following the death of his mother in 1998.

Mr. Ziem can’t recall exactly which month his mother died, although it was during the dry season when farmers were collecting their crops.

He says he just wants to rest his head in her lap and have her touch his back. Mr. Ziem indicates that he feels this way every time memories of his mother surface and that he is unable to move on.

Mr. Ziem still pines for the woman who died 24 years ago on an otherwise ordinary day.

“She was sick for just about a month if I remember and died. The morning she died, I didn’t want to go to school because of her condition because I noticed her sickness had become very serious the previous night. But it’s like she saw her death coming and didn’t want me to witness how she would die and so she insisted I went to school that day.”

“I was in class when my class teacher and former classmate of my mum madam Joan came and called me. I went out to meet her and she told me my uncles have asked to see me. She asked two of my classmates to accompany me to the village which wasn’t too far from the school to see my uncles.

“When I got home I noticed the death silence and one of my uncle’s wives who saw me started crying and it dawned on me that my mum had passed away after we left for school.”

Mr. Ziem believes he was fortunate that the primary school he attended provided food for the students. So, even when he was in JHS, Mr. Ziem benefited from a unique dispensation granted by the school’s headmistress, who happened to be his late mother’s friend and had the same first name as his mother.

“I was a brilliant child and I could write letters to the Catholic brothers for Assistance. Rev. Brother Wind and Rev. Brother Saatuo helped me a lot with money to buy books, sandals and other things.”

Mr. Ziem was like a magnet everywhere his mother went, especially when she went back to Nandom in the Upper West Region to remain with his siblings.

Madam Ziem desired for her children to advance in life and have a positive impact on others.

Mr. Ziem claims that she went to the construction firm every morning before they went to school in the village.

“So we used to walk about 3km to and from school.” He said.

Late Madam Ziem and Mr. Ziem’s late father, who died in 2018, David Koyag Kubbie and they had three sons.

Mr. Ziem’s father worked as a chef for Catholic priests and other groups. When Madam Ziem gave birth to her last child, Luke Ziem, in 1990, the couple split up.

“My mum took us to his brother in Kumasi where we stayed until 1993 she asked me to follow one of her elder brothers who had come down to Kumasi to Nandom so that I can start schooling.”

Mr. Ziem states he never met his father until 2006, when he travelled to Tamale after his parents divorced in 1990.

“That’s a long time and so I wouldn’t say we had a good relationship as father and son.”

Mr. Ziem is now a media consultant at Rudder Communications and Chief Editor at SavannahNewsOnline.Com.