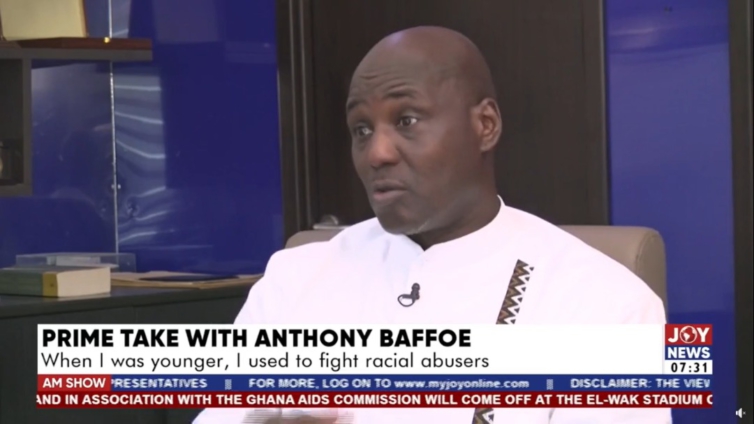 A former Black Stars captain, Anthony Baffoe, has revealed disturbing instances of racism he faced growing up in Germany.

As one of the first African players to join the Bundesliga, he shared that although he contributed to making the football league interesting, he wasn’t given the respect he believed he deserved.

According to him, there were instances where the ultras sometimes chanted racial slurs or pelted him with bananas while on the pitch.

Tony recounted a day when he was out with his mother and was subjected to racial epithets that implied they were slaves.

Despite his mom’s advice to him to ignore them, he said he crossed over to the boys and beat them up.

“That was, my way, of defending ourselves (others of the black race),” he told host Muftawu Nabila Abdulai.

Moreover, he said as he matured, became wiser and more educated, he utilized a new strategy to fight his abusers – verbally, with wit and sarcasm.

The former C.A.F Deputy General Secretary stated that as he became more renowned, he often received messages from mothers, inquiring what to do about their wards who were experiencing racism at school.

As his way to offer the afflicted kids support and shut down their bullies, he said he drove to the schools of such kids and professed he was their uncle.

“I gave them that confidence that I am with them, they are from my family, and everybody became quiet. That made me realise that now when I speak, I’m no more talking for only myself,” he said.

Subsequently, Anthony added that those experiences made him realise the influence he had, and that impacted him to learn about the (African) history and culture.

He accredited his ability to resist bigotry to his mental fortitude, and the thoughts of the younger generation having an easier life.

With that, he asserted that not only is he a Pan-Africanist, but he is an Africanist as well.

“You can’t learn to have a good character. You are either born with it, and I was an activist. I’m still an activist.”

DISCLAIMER: The Views, Comments, Opinions, Contributions and Statements made by Readers and Contributors on this platform do not necessarily represent the views or policy of Multimedia Group Limited.
Tags:
Anthony Baffoe
German
Racism