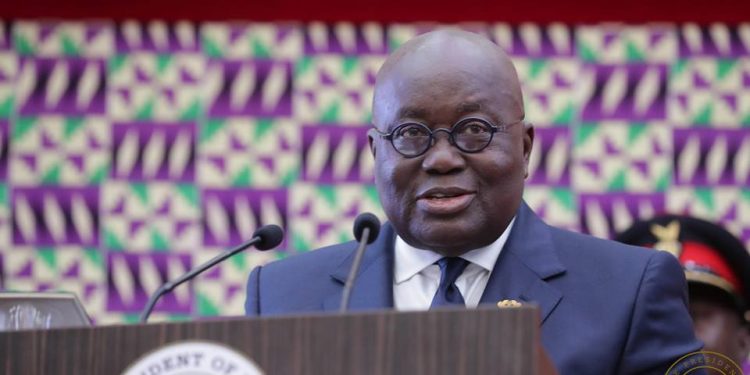 President Akufo-Addo has reiterated his commitment to repeal Article 55(3) of the 1992 Constitution which bars political parties from participating in the election of Metropolitan, Municipal and District Chief Executives (MMDCEs).

Article 55(3) states that, “Subject to the provisions of this Article, a political party is free to participate in shaping the political will of the people, to disseminate information on political ideas, social and economic programmes of a national character, and sponsor candidates for elections to any public office other than to District Assemblies or lower local government units”.

Addressing the nation on Thursday on the 30 years anniversary of the promulgation of the 1992 Constitution, the President said the amendment of this article of the Constitution would enable a healthy body politic.

President Akufo-Addo in this regard has announced that he will bring back this subject to the front burner of public discourse for further action to be taken.

He, assured that he will ensure that a mass consensus is reached on the matter before the repeal takes place.

“It was and continues to be in my view that the repeal or modification of an entrenched clause in the Constitution should attract widespread support to make it acceptable and healthy for the body politic. We should further bear in mind the strong attachment of the Ghanaian people to the multi-party democratic elections.

“I have said it before and I will repeat it, I will continue to work for the extensive mass consensus on this issue, and should such a consensus be attained for the repeal of Article 55(3) of the Constitution and in an agreement reach for political parties to participate and sponsor candidates for elections to District Assemblies,” the President said.

President Akufo-Addo in 2019 attempted to repeal this section of the Constitution to allow for political parties to participate and sponsor the election of MMDCEs.

But the opposition NDC advocated and urged Ghanaians to reject the proposal.

The party argued that if the repeal goes through, the toxicity in politics at the national level will degenerate to the local level.

“At the meeting held last Thursday, the NEC of the NDC affirmed our long held position that MMDCEs should be elected. We however took the view that the local government system should remain non-partisan and that individuals contest the District Assembly and Unit Committee elections on their own merit. We, therefore, decided to campaign for a NO vote at the referendum and to urge all Ghanaians to vote NO at the referendum.

“It is our well-considered view, and indeed that of well-meaning Ghanaians, that the needless NDC-NPP polarization at the national level should not be extended into the District Assemblies and Unit Committees, which is what will happen if we vote to make the local government system partisan,” the party said in a press conference in Accra at the time.

DISCLAIMER: The Views, Comments, Opinions, Contributions and Statements made by Readers and Contributors on this platform do not necessarily represent the views or policy of Multimedia Group Limited.
Tags:
1992 Constitution
Article 55(3)
President Akufo-Addo
Repeal