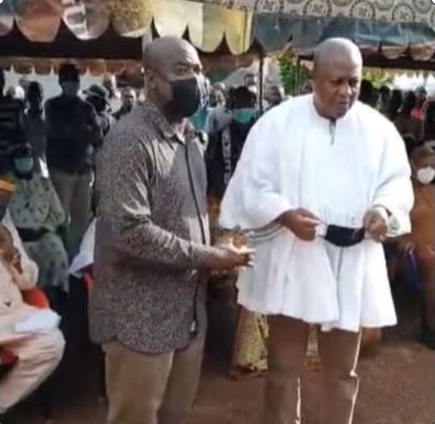 The 2020 presidential candidate of the National Democratic Congress (NDC), John Mahama, has assured the people of Dagbon that the NDC when voted into power, will support all relevant stakeholders within the Dagbon Peace Project impartially in order to consolidate the peace of the area.

The former President was speaking at two separate events at the Gbewaa Palace in Yendi and the Nanton-Naa Mahamadu V’s Palace at Nanton Zuo over the weekend as part of his two days ‘Thank-You Tour’ of the Northern region.

Speaking at the palace of the Ya-Na, the former President said his government “will not give the Ya-Na a cow in front of the whole world and go back to hold its tail.”

He, therefore assured the overlord of Dagbon that the future NDC government will lend the entire people of Dagbon its full and impartial support to ensure rapid development of the area.

Mr Mahama, while addressing the chiefs and people of Nanton at the Nanton-Naa Mahamadu V’s Palace at Nanton-Zuo, consoled the Nanton-Naa for his predicaments, describing him as a political victim.

According to him, the Nanton-Naa is not supported by the government to assume his rightful traditional role in Nanton town because of his perceived membership of the NDC.

He bemoaned the practice where governments excessively interfere in chieftaincy matters and encourage people who lack the requisite qualification to hold themselves up as Chiefs, without being appointed by the rightful appointing authority.

“You know that it is because of us that he is suffering from some of the problems he is going through, but the fact is that the truth will always triumph

“It is the same Ya-Na that has authority over Nanton and he has done it and it must come to pass, the truth will prevail…we know that he is here temporarily.

“We are looking forward to the day we will come and greet him in his palace,” he said.

The former President predicted that God would intervene at the right time, for Nanton-Naa Mahamadu V to get home peacefully to Nanton Township to continue his reign.

Nanton-Naa Mahamadu V thanked the former President and his entourage for making the time to visit him.

He assured the former President that as law-abiding people he and his chiefs will continue to respect the relative peace of Dagbon irrespective of provocations by his detractors.

Nanton-Naa Mahamadu V expressed surprise at the level of impunity by some people in Dagbon despite government assurances to unite them.

DISCLAIMER: The Views, Comments, Opinions, Contributions and Statements made by Readers and Contributors on this platform do not necessarily represent the views or policy of Multimedia Group Limited.
Tags:
Dagbon
John Mahama