I will suppress and repress corruption – Special Prosecutor 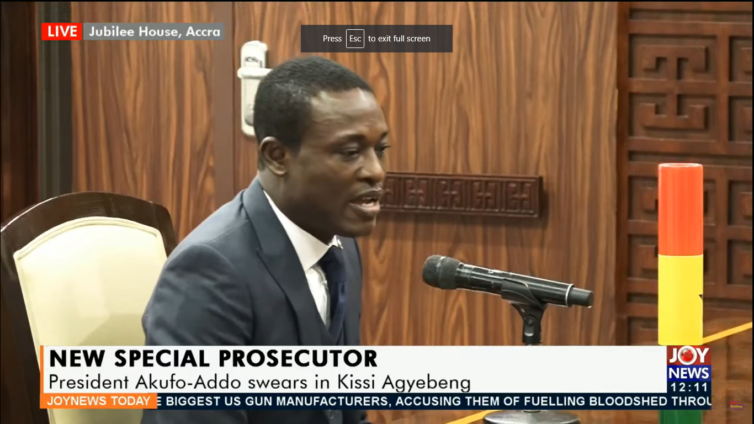 The newly appointed Special Prosecutor, Kissi Agyabeng has vowed to suppress and repress corruption in the country.

He made this promise during his swearing in ceremony at the Jubilee House by President Akufo-Addo on Thursday, August 5, 2021.

The 43 year old Lawyer, was sworn in today to begin a 7 year mandate. The office became vacant last year following the resignation of Martin Amidu who accused the President of political interference in his work.

JoyNews/AdomNews · I will suppress and repress corruption – Special Prosecutor

Mr Agyebeng therefore stressed that he will make corruption a high risk venture.

“As I come into this office, I pledged to the people of Ghana, as I said only two weeks ago, that I’m going to work assiduously with delegation to suppress and repress corruption,” he said.

He added that though corruption is inborn to humans, “I will not be naïve to assume that I am coming to stop it.”

But, the Special Prosecutor believes that as he formally takes office,” he is going to drive it [corruption] down and repress it to its barest minimum.”

Meanwhile, President Akufo Addo says despite the unfortunate events that led to the exit of Martin Amidu as special prosecutor, he does not regret appointing him.

Describing him (Kissi Agyebeng) as highly qualified, the President charged him to fight corruption independently.

The President also assured government will increase budgetary support to other anti-corruption institutions to help with the fight against the canker.

DISCLAIMER: The Views, Comments, Opinions, Contributions and Statements made by Readers and Contributors on this platform do not necessarily represent the views or policy of Multimedia Group Limited.
Tags:
Corruption
Kissi Agyabeng
Special prosecutor