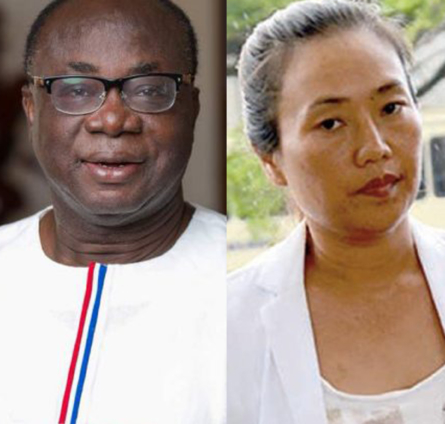 Lands Minister, Samuel Abu Jinapor, says although former National Chairman of the NPP, Freddie Blay, did no wrong by accepting to represent four of Aisha Huang’s accomplices, he wishes the party stalwart had declined to take up such a case.

This, according to him, is because the development will fuel conspiracy theories against the government’s galamsey fight.

The four accomplices; Gao Jin Cheng, Lu Qi Jun, Haibin Go and Zhang Zhipeng together with the ‘galamsey’ queen, Aisha Huang are being held by the state for their involvement in illegal mining, popularly known as ‘galamsey’ in the country.

On Tuesday, a private legal practitioner, Lucy Ekeleba Blay, had announced in court that she was holding brief for Mr Blay in the case of the four accomplices of Aisha Huang.

Mr. Blay, following the announcement has come under severe criticisms at a time the government is already facing accusations of shielding more prominent, politically-exposed persons involved in galamsey.

But in defence, the NPP guru said his law firm has the responsibility of representing persons they believe are innocent of charges brought against them.

Speaking on Asempa FM’s Ekosii Sen, the Minister who doubles as Damongo Member of Parliament said he is concerned despite the defence put out by Mr Blay.

“I wish Freddie Blay declined it but that is not for me to say; because immediately his daughter announced the brief in court, I told my assistant this is going to be controversial and will fuel conspiracy theories,” he said.

However, he added that Mr Blay being a legal representative will not cause the government to relent on its decision to prosecute the case.

“A lawyer’s representation of a client is steeped in the jurisprudence of our country’s laws and the criminal justice system presumes a person innocent until proven guilty.

“What we have to do is to continue to prosecute these accused persons in a very spirited manner and hopefully secure convictions and secure severe punishments for them, and that will dispel all the conspiracy theories that are being spread around,” he noted.

DISCLAIMER: The Views, Comments, Opinions, Contributions and Statements made by Readers and Contributors on this platform do not necessarily represent the views or policy of Multimedia Group Limited.
Tags:
Aisha Huang
Freddie Blay
Galamsey
Samuel Abu Jinapor