I won’t advertise for a betting company – Joe Mettle 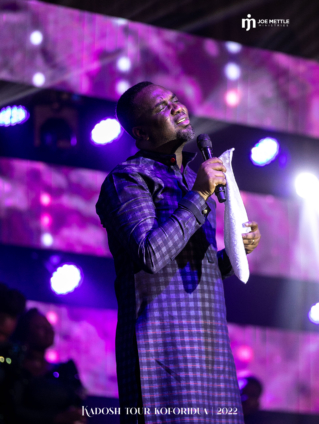 Gospel singer, Celestine Donkor is conflicted on whether or not to advertise for a betting company but for her colleague Joe Mettle the decision is an easy one.

According to Joe Mettle, as a minister of God, he would like to distance himself from betting companies.

Speaking on Daybreak Hitz on Hitz FM on Thursday, he said “it’s a straight no for me.”

“I happen to be a minister of God who is gifted with the ability to sing and so my first assignment is to my service to God and He expects certain things as well from me,” he added.

His comment comes after musician, Celestine Donkor sought advice from her fans and followers about a sponsorship deal from a betting company.

In an email she shared online, the company was ready to offer her up to $7000 if she chooses to advertise them on her pages.

She called on the public to help her decide especially since she is a Gospel musician and did not know if she should take the job.

Celestine Donkor also noted that because sponsorship was hard to come by for Gospel artiste, the money would go a long way to help her ministry.

However, Joe Mettle noted that he would not have asked anyone for advice.

“One needs to know where to draw the lines and what will work or will not work for you,” he said.

Meanwhile, Joe Mettle believes that because sponsorships and deals are essential for an artiste, other companies should also collaborate with them.

The singer added that despite the lack of funds, they are able to organise their shows and make impact.

“I don’t know how but the events we were doing had no company sponsoring but we got individuals sending in money as their support.”

“One of the things I have realised is despite all that, each time something needs to be done, God in His own way makes a way,” he added.