'I won't be distracted by machinations of the State' - Ato Forson reacts to AG's suit - MyJoyOnline.com 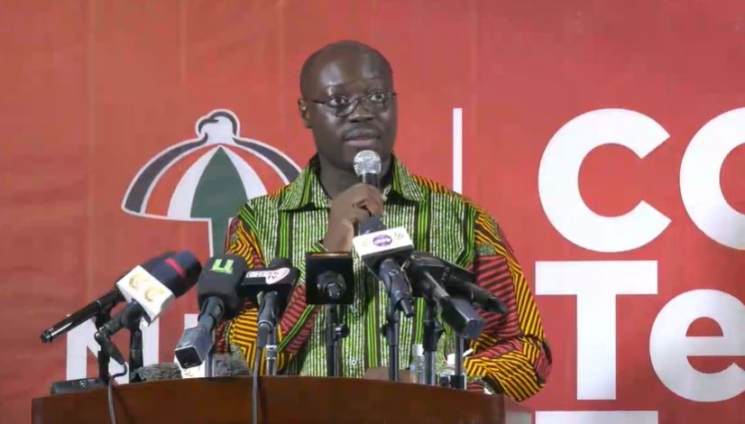 The Ranking Member on Parliament’s Finance Committee, Dr Cassiel Ato Forson has reacted to a suit by the Attorney- General, accusing him of causing financial loss to the state.

In a Facebook post on Thursday evening, the Member of Parliament for the Ajumako-Enyan-Esiam constituency, Cassiel Ato Forson indicated that even though he has taken note of the criminal charges levelled against him, the development will not cause him to develop cold feet in his advocacy against the “repressive policies” of the government.

“My attention has been drawn to the widely circulated stories suggesting that the Akufo-Addo government has brought criminal charges against me. I shall not be distracted by the machinations of the State just because I stand with the good people of Ghana to oppose repressive policies of this government”, Dr Forson said.

The legislator also added that he’ll engage the press on Friday, December 24, to respond appropriately to the suit filed against him by the Attorney-General on Thursday.

“As I prepare to fully address the matter tomorrow at a press briefing, I urge all right-thinking members of our society to remain calm”, Dr Forson stated.

The charges also included Sylvestre Anemana, Chief Director at the Ministry of Health at the time of the contract and a businessman, Richard Jakpa.

The case relates to the procurement of 200 ambulances by the Prof. John Evans Atta Mills and John Mahama led government. Documents filed by the AG’s office trace the events culminating into the alleged crimes to an announcement made in the 2009 State of the National Address regarding plans to procure ambulances for the country.

Cabinet, according to the AG, gave an Executive Approval for the project. However, it emerged later that the ambulances had some defects which render them not fit for purpose.

Read the full facts as narrated by the AG below

“On December 22, 2011, Cabinet endorsed an Executive Approval that had been granted for a joint memorandum submitted by the Minister for Health and the Deputy Minister for Finance and Economic Planning for the purchase
of 200 ambulances for the National Ambulance Service (NAS), out of a medium-term loan facility of €15,800,000 to be paid out of a credit arrangement between Stanbic Bank Ghana Limited and Government of Ghana through the Ministry of Finance.

By a joint memorandum dated 30th April 2012, the Minister for Finance, Dr Kwabena Duffuor, and the Minister for Health, Alban S. K. Bagbin, applied for parliamentary approval for the supply of 200 ambulances at a price of
€15,800,000 to be paid out of a credit arrangement between Stanbic Bank Ghana Limited and Government of Ghana through the Ministry of Finance.

This memorandum to Parliament did not make reference to any role to be played by either Big Sea General Trading Limited (Big Sea), Dubai, UAE or the agents for Big Sea, Jakpa at Business Limited in the transaction.

By a letter dated 19th November 2012, the 2nd accused person, who was then the Chief Director at the Ministry of Health, requested approval from the Public Procurement Authority (PPA) to engage Big Sea through a process of
single-sourcing for the supply of 200 ambulances.

The letter falsely indicated that the reason for the single-sourcing was because Big Sea had arranged for funding for the project.

By an agreement dated 19th December 2012, the Government of Ghana, represented by the Ministry of Health, formally contracted with Big Sea General Trading LLC, based in Dubai, for the supply of 200 Mercedes Benz
ambulances. The contract sum was €15,800,000 at a unit price of €79,000.

The terms of delivery, as per the agreement, were that the first consignment of 25 vehicles should be delivered within 120 days of execution of the agreement. The outstanding 175 vehicles were to be delivered in batches of 25 every 30 days thereafter.

By the terms of the agreement, advance payment was prohibited. Also, payment for the purchase price of €15,800,000.00 was to be by “raising an irrevocable and transferable Letter of Credit” from Government of Ghana’s
bankers for the benefit of the Supplier. Upon delivery of every 50 ambulances, 25% of the purchase price was to be paid through confirmed letters of credit (LC) on sight of goods opened in favour of the supplier, upon submission of a number of documents specified in the agreement.

On August 7, 2014, the 1st accused person, Cassiel A. Forson wrote to the Bank of Ghana “urgently requesting … to establish the Letters of Credit for the supply of 50 ambulances amounting to EUR3, 950,000 representing 25 percent of the contract sum, while arrangements are being made to perfect and sign the loan agreement. … in favour of Big Sea”

On August 12, 2014, the 1st accused person wrote to the Controller and Accountant-General, authorising the release of the sum of ¢806.688.75 to the Minister for Health to enable him to pay the bank charges covering the establishment of Letters of Credit (LCs) for the supply of 50 Mercedes Benz Ambulances and Related Services.

He further directed that the LCs should be charged to the budget of the Ministry of Health contrary to the Parliamentary approval on the funding for the supply of the ambulances.

‘The Controller and Accountant-General, on the authority of the letters dated August 7 to 12, 2014 written by the 1st accused person, wrote to the Bank of Ghana on August 14, 2014, authorising it to establish an irrevocable
transferable Letters of Credit in the sum of €3,950,000 in favour of Big Sea.

A consignment of 10 ambulances which was shipped from Dubai on October 22, 2014, arrived on December 16, 2014. A post-delivery inspection of the first batch of 10 ambulances revealed that same were without any medical
equipment in them. Other fundamental defects included defects on the body of the vehicles and the patient compartment of the ambulances.

Same were brought to the attention of Big Sea in a letter dated February 11, 2015, written by the 2nd accused, Sylvester Anemana. By a reply dated February 19, 2015, Big Sea acknowledged the defects with the vehicles but indicated that they proceeded to ship the vehicles when they received the LCs on August 18, 2014.

The company also stated that the second consignment of 10 vehicles with the same defects had been shipped
51 days before the date of the letter from the Ministry. The company promised to send their technicians to fix all issues relating to the defects and train Ghanaian staff before handing over the ambulances.

The third batch of 10 vehicles were shipped on 12th February 12, 2015. By this time, the second batch had already arrived at the Tema Port. All the 30 ambulances had the same fundamental defects stated above. A further inspection by Silver Star Auto Limited at the request of the Ministry of Health disclosed that the vehicles were not originally built as ambulances and were therefore not fit to be converted for that purpose.

A total amount of €2,370,000 was paid for the 30 vehicles. The 3rd accused person as the local representative of Big Sea, knowing that Big Sea had not shipped ambulances, still arranged with his principal to supply the purported ambulances and contracted with Big Sea to charge a commission of 28.5% on the proceeds of the supply of these vehicles purported to be ambulances to the Government of Ghana.

By a letter dated January 20, 2016, the then Minister for Health, Alex Segbefia, informed Big Sea that the vehicles did not meet ambulance specifications and were not fit for purpose.

The Minister requested for an inspection of a well-equipped ambulance vehicle that meets specifications by
February 20, 2016. Following this, a team led by the CEO of the National Ambulance Service proceeded to Dubai and held an inspection on February 11, 2016. After the visit to Dubai, Big Sea undertook to send a technical team to Ghana to rectify the defects. This has not been done.”