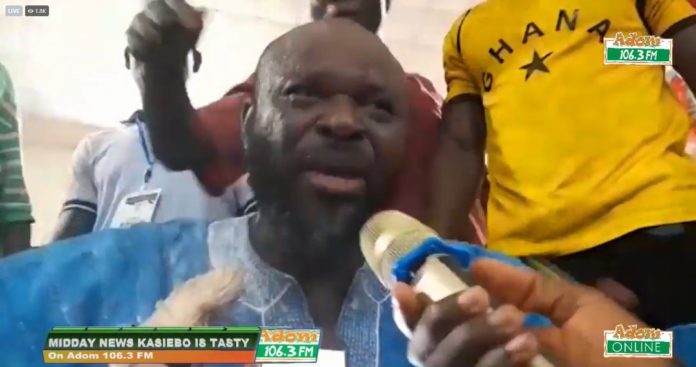 A defeated aspirant for the chairmanship position of the National Democratic Congress (NDC) in the Northern Region, Godfred Wumbei, has said he will not accept the electoral results.

This, according to him, is because the results do not reflect reality.

The Chairmanship position was contested by four persons and after the voting on Sunday, Ali John Adolf emerged as the victor with 247 votes.

The outcome came as a surprise to Mr Wumbei, which caused him to weep uncontrollably.

He subsequently demanded to be sworn in as the chairman.

He claimed at the end of polls, he was leading by 11 votes which his agents confirmed but for reasons he cannot tell, his opponent was rather declared winner.

“I will never accept the defeat today or tomorrow. The total ballot vote cast was 591 for the Chairmanship position. The first had nine votes, the second had 236 votes, and I was 3rd with 247 votes.

“My agent came to tell me I had won but I later realized the person who had 236 was rather declared the winner,” he claimed.

The aggrieved aspirant disclosed he went to request the polling sheet to see the results for himself but was declined while his call for a recount was also rejected.

He, however, indicated this will not be the end for him, stating he will soon announce his next line of action.

DISCLAIMER: The Views, Comments, Opinions, Contributions and Statements made by Readers and Contributors on this platform do not necessarily represent the views or policy of Multimedia Group Limited.
Tags:
Godfred Wumbei
NDC
Northern region