Illegal miners forcing residents out of their homes 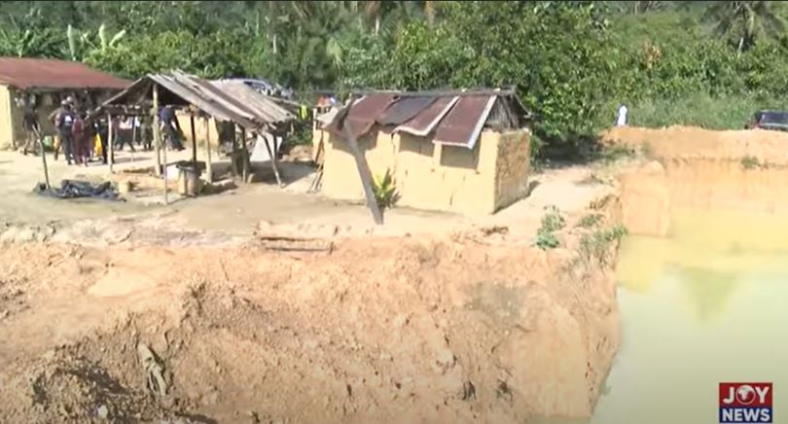 Illegal miners are forcing residents out of their homes

Some residents in the Eastern Region town of Apinamang are intimidated and frustrated as they are being forced out of their homes by illegal miners.

Activities of illegal mining popularly called ‘galamsey’ is beginning to wreak havoc and is threatening the livelihoods of residents.

In the case of Joyce Wowornyo, the ‘galamseyers’ have dug around her house in a bid to take over her land in search of gold.

She lives far in the Apinamang forest and has witnessed the terrible effects of illegal mining firsthand.

The miners offered to buy her out of her land.

“One day, the miners came and asked me to pack out. I refused. So they excavated the land around us. They made a circle round my house. Now my farm land has been destroyed. I put all my energy into it,” Joyce lamented.

The 43-year-old mother of five recounted that her experience with the illegal miners was scary.

“Many times they threatened me. They even told me they had already bought the land from someone. I still didn’t move. Sometimes, I would be cooking in my kitchen and they would digging just in front of me.”

Touring some illegal mining sites in the area with the Christian Council, JoyNews discovered that Joyce Wowornyo is not alone in the Apinamang forest.

Many small households are seen abandoned with the lands excavated.

The chief of the area, Osabarima Bibiarawonemere Oware Asare Pinkro III, noted that activities of illegal mining is getting out of hand.

“I am helpless. If you go to check the extent of damage caused by these illegal miners and how they have left the pits uncovered, you will be sad. I will not, and cannot be part of the galamsey activities.

“The streams and all the water bodies have been polluted,” he bemoaned.

Members of the Christian Council of Ghana also visited the area to assess the level of devastation caused by illegal mining as they prepare to take a stand against activities of galamsey.

Meanwhile, President Akufo-Addo has given yet another verbal assurance his government will stop the illegal mining menace.

He was speaking at the Manhyia Palace in Kumasi at the start of a four-day tour of the Ashanti region.

DISCLAIMER: The Views, Comments, Opinions, Contributions and Statements made by Readers and Contributors on this platform do not necessarily represent the views or policy of Multimedia Group Limited.
Tags:
Apinamang
Christian Council of Ghana (CCG)
Eastern Region
Galamsey
Illegal mining