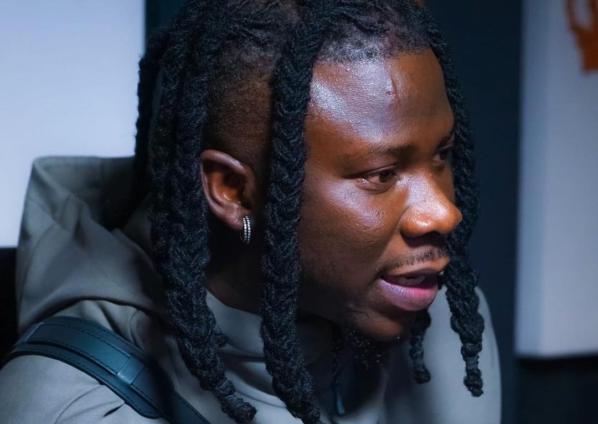 Reggae/Dancehall musician Stonebwoy has reacted to a viral video showing individuals running away from a Black Toyota Land Cruiser v8 vehicle set on fire, with a man lying motionless not quite 20 meters away.

The vehicle had apparently been driven into a side drain and had its left front part stuck. The incident was recorded at Dzorwulu in Accra.

Stonebwoy, in a post on social media, stated that he was disappointed to see people record the man who was bleeding from the head region without offering him any help.

He says it seemed the witnesses, like other people in similar situations elsewhere, were more interested in capturing the moment than helping the man whose life was apparently in danger.

“Like I’m so disappointed in some of us. Our smartphones have sucked out our common senses. He could have called an ambulance or the Fire Service anyway realising how it takes forever for both Fire and ambulance to show up.”

“How about quickly arranging a taxi to carry this man to the hospital to save his life? I see many of us are interested in filming the incidents that happen in order to post instead of actually saving the situation and then dealing with the extras later,” Stonebwoy wrote.

He urged the general public to do better in such situations.

Meanwhile, the incident was said to have resulted from a dispute over a parcel of land at Central Dzorwulu in Accra.

The vehicle was said to belong to two suspects who had organised to demolish a bedroom apartment and were trying to escape from the police.

The suspects, Nana Owusu Banahene and James Quainoo, were arrested for demolishing the four-bedroom apartment and allegedly attacking occupants of the house.

DISCLAIMER: The Views, Comments, Opinions, Contributions and Statements made by Readers and Contributors on this platform do not necessarily represent the views or policy of Multimedia Group Limited.
Tags:
Dzorwulu
Stonebwoy