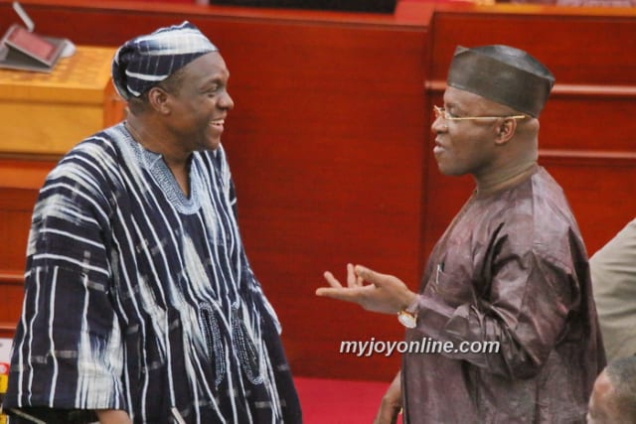 Speaker of Parliament, Alban Bagbin has reminded Osei Kyei-Mensah-Bonsu of the difference in their portfolios as far as leadership in Ghana is concerned.

Tuesday’s sitting saw a brief banter between the two long-time friends as the Majority leader sought to encourage Mr Bagbin to be stringent and fair in certain proceedings in the house.

The Speaker had referred a petition by former governor of Bank of Ghana Dr Kwabena Duffuor over the collapse of uniBank to a committee of the House.

Kyei-Mensah-Bonsu had challenged the petition which was brought by MP for Bawku Central, Mahama Ayariga but was subsequently overruled by the Speaker; resulting in the friendly altercation.

“You don’t lead Parliament. You lead the business of the House. You lead the majority and you lead government business. As to the role of Speaker you’ve not been there yet. When you get there you’ll do so,” Bagbin told Majority Leader

Along the line, Mr Bagbin began to question the status of their friendship as it had become a subject of controversy within his circles, apparently.

“You’ve been my good friend from all these years, until I became Speaker. Everybody in Ghana was doubting whether indeed you were really my friend. I’ve received a lot of calls about us and I said you’re my friend and you’re still my friend. Please don’t give credence to that,” the Speaker said.

After another round of jovial attempts by the Suame MP to defend his position as an ally, the Speaker made a concluding submission which would throw the whole house into amusement.

“You have to be my friend, not me being your friend. At least, I have a position in Ghana, Number 3. What is your number?” he quizzed.

According to Ghana’s constitution, the Speaker of Parliament takes charge of the country’s affairs in the absence of the President and Vice President, making him the third most powerful personality of the land.