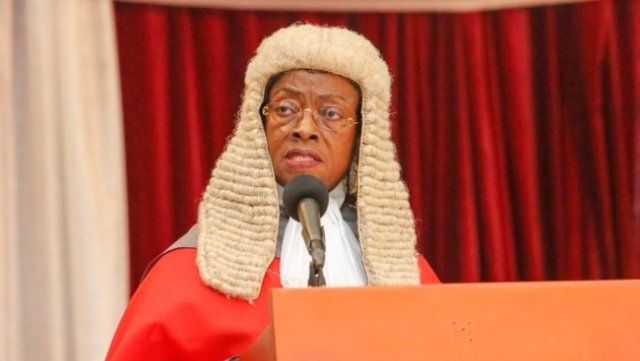 A former Chief Justice, Sophia Akuffo, has expressed her displeasure with Asawase MP’s allegation that a Supreme Court Judge offered to bribe an NDC MP to influence the outcome of the Speakership elections.

Mohammed Mubarak Muntaka’s accusation according to her has defamed other innocent Judges of the apex court who have built a reputation for themselves over the years.

This she said, “I am upset at the very thought that, that kind of accusation will be made. I don’t like accusations like that. It is like throwing a bucket of dirty water at people and you were aiming at somebody but you just threw it and it dirties everybody.”

Sophia Akufo, however, insisted that if these claims by the MP were true, he should be bold and mention the name of the Judge rather than generalize it.

“There are 17 people you have defamed in that causal manner but you are talking about only one person so there are 16 people who have been wrongly done by,” she said.

Mr Muntaka who was speaking on JoyNews’ The Probe, alleged that a very prominent judge contacted an NDC MP; offering an inducement should the person vote in favour of the New Patriotic Party’s (NPP) Speaker nominee, Prof Aaron Mike Oquaye.

She also indicated that the Chief justice is looking into the matter and has written to the MP to make himself available to assist in investigation.

DISCLAIMER: The Views, Comments, Opinions, Contributions and Statements made by Readers and Contributors on this platform do not necessarily represent the views or policy of Multimedia Group Limited.
Tags:
Muntaka Mubarak
Sophia Akuffo