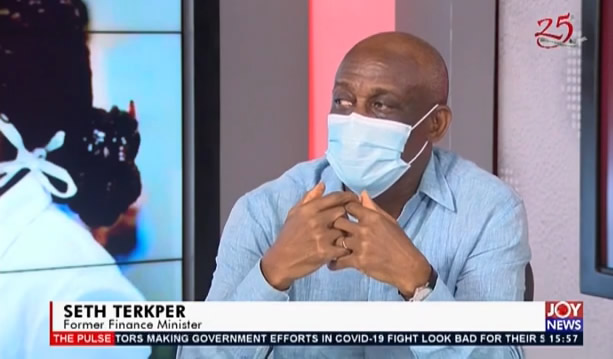 Former Finance Minister Seth Tekper has defended his former boss John Mahama over claims he made about the country’s debt stock.

Mr Terkper said the NDC flagbearer was not wrong to have said that the country has incurred a high debt since the Akufo-Addo government assumed office.

“I don’t see the difficulty when my boss is talking about debt relief issues. I think we also would have been an honest broker if they [the NPP] had also set the records straight in 2015 that Ghana was not a HIPC country.

“Because we were then on an IMF program when the Vice President made those many assertions that our debt to GDP ratio is at 67% which today is only 55.5% on a rebase basis and has gone up to 77%,” he told Daniel Dadzie on JoyPrime’s Prime Morning, Wednesday.

His comments come on the back of arguments on the country’s debt stock, following a claim by Mr Mahama that Ghana has once again been ranked in the category of Highly Indebted Poor Countries (HIPC).

However, Information Minister Kojo Oppong Nkrumah during the Nation Building Updates on Tuesday debunked this claim by the former President.

He labelled the claims as a deliberate attempt to discredit governments efforts at reviving the economy since assuming office in 2017.

Wading into the argument, Mr Tekper said the former President pointed to a fact, the country’s debt sustainability analysis is not sustainable enough.

“That’s a fact that cannot be denied [that] our own debt sustainability analysis the IMF projected is not sustainable on a new GDP basis of 77% in fact, I belief it is fetched that we even crossed 80%,” he said.

Mr Terkper emphasised that perhaps the IMF would have been an honest broker if it had corrected Dr Bawumia to set the records straight on the country’s debt situation in 2015 when the NDC was in office.

“Mr. Mahama is using the same criteria which the former Vice President used. And he [Bawumia] said a lot, including having the means to generate revenue which he now has denied.

“Now he is in denial that the NPP said they will not borrow [during their tenure] but these are all factual things they said,” Mr Tekper added.