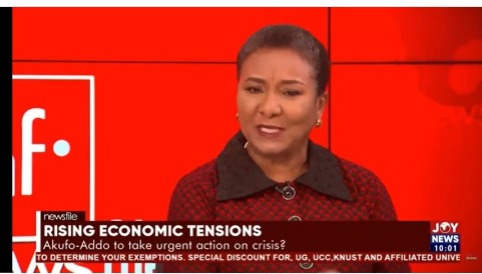 A former Deputy Finance Minister, Mona Quartey, has alleged that officials of the International Monetary Fund (IMF), have discovered some inaccuracies in the macro-economic figures presented by government’s economic management team.

According to her, this revelation raises credibility issues which can potentially affect the outcome of Ghana’s ongoing engagements with the IMF.

Contributing to discussions on Newsfile on Saturday, the former NDC appointee, expressed her displeasure about the conduct of the economic management team.

“There has to be a change of the economic management team. This team is no longer credible. This is a team that has lied, not only to the people of Ghana outside your party, but they’ve also lied to you [Akufo-Addo]. And the IMF has found them out. The numbers they gave; the macro-economic numbers they gave were not correct”, she said.

Noting her reservations, the finance expert wondered why the President has refused to sack the members of the economic management team, whom she stressed, have failed in the discharge of their responsibilities.

She added that the Finance Minister, Ken Ofori-Atta, has no business being at post, after supervising the present economic decline.

The comments by Mona Quartey come at a time when scores of Ghanaians are making passionate appeals for the Finance Minister to be sacked.

According to his critics, Mr Ofori-Atta has failed woefully and therefore has no business being at the helm of affairs of leading Ghana’s engagements with the IMF.

Earlier this week, this posture was articulated by some 80 MPS from the ruling government who petitioned the President for Ken Ofori-Atta to be sacked.

Addressing a pres conference on Tuesday, the MPs threatened that they will not support any government business, if the President fails to listen to their demands.

But in a quick turn of events, the MPs, after meeting the President backed down on their calls, aftter the President implored them to allow the Finance Minister to finish the ongoing negotiations with the IMF and presentation of the 2023 Budget Statement.

Touching on this development, Mona Quartey said she is disappointed by the posture of the said MPs.

On Tuesday, the Minority filed a motion to that effect following the Majority MP’s demands to have the Finance Minister and the Minister of State in charge of Finance at the Ministry of Finance, Charles Adu Boahen dismissed.

According to them, Mr. Ofori-Atta is incompetent and is to blame for the current economic woes of Ghanaians.

Speaking exclusively to JoyNews, Minority Leader Haruna Iddrisu said they are hopeful by 10th November, they can conclude processes to remove the Finance Minister.

DISCLAIMER: The Views, Comments, Opinions, Contributions and Statements made by Readers and Contributors on this platform do not necessarily represent the views or policy of Multimedia Group Limited.
Tags:
Akufo-Addo
ECG
IMF
Ken Ofori-Atta
Mona Quartey