Implement our recommendations and stop being confrontational – Segbefia to EC 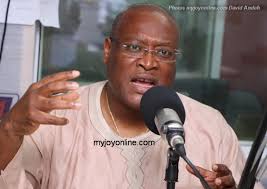 The Head of the International Relations Desk of the opposition National Democratic Congress, Alex Segbefia has demanded that the Electoral Commission (EC) considers his party’s recommendations with a high level of urgency.

According to him, the conclusions reached in the NDC’s report will improve the activities of the Commission.

“As for me, my first issue is that they [EC] should consider our recommendations seriously regardless of whether the NDC is at the table or not. If the recommendations are good for Ghana, they should implement them and stop being confrontational, after all, NDC isn’t the only party at IPAC,” he said.

He made these comments on JoyNews’ political analysis programme, Newsfile on Saturday, August 28.

The NDC during a meeting with the press on Wednesday, August 11, made some proposals for reforms in the electoral system.

Calls to make Electoral Commissioners subject to Parliamentary approval were paramount among the issues tabled by the NDC.

The party had earlier declined an Inter-Party Advisory Committee (IPAC) invitation explaining that the Committee had issues that had to be addressed before they could participate.

However, the Jean Mensah-led Electoral Commission has directed the opposition NDC to table its proposed electoral reforms before IPAC for dialogue.

Speaking on JoyNews, Mr Segbefia called on the EC to change its entrenched stance and work towards assessing their report for development.

He further explained that “we have also been to a lot of places where the content of the recommendations hasn’t been challenged.”

“We have also been to a lot of places where the content of the recommendations hasn’t been challenged. The content of most of the issues has been accepted as very useful documents and a lot to learn from because actually most of them are not new.”