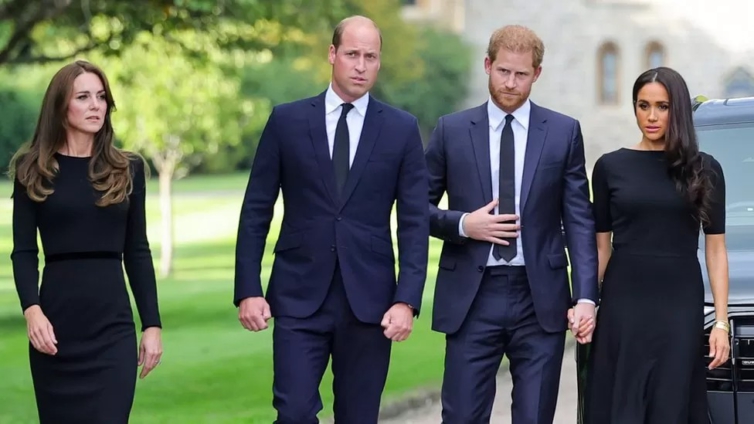 At Windsor Castle, the crowds who came to pay their respects to Queen Elizabeth II were surprised when William and Catherine, the new Prince and Princess of Wales, appeared through the gates with Prince Harry and Meghan.

Together, they viewed tributes left for Britain’s longest-ever reigning monarch and greeted the crowds.

It was the first time the four of them have been seen together in more than two years.

At Crathie Kirk, a church near Balmoral in Scotland, the Queen’s three younger children, Princess Anne, Prince Andrew and Prince Edward, were among the family members who viewed the floral tributes.

Her Majesty’s four granddaughters, Zara Tindall, Princesses Beatrice and Eugenie and Lady Louise Windsor, plus her eldest grandson Peter Phillips, were also there.

Earlier in the day, King Charles III was formally proclaimed king, following the death of his mother, Queen Elizabeth II, on Thursday.

King Charles dedicated the rest of his life to serving as monarch at the meeting of the Accession Council at St James’ Palace in London.

In his address, he paid tribute to the Queen and spoke of the “irreparable loss we’ve all suffered”.

He was accompanied by his wife, Camilla, the Queen Consort, and the heir to the throne, Prince William.

The ceremony was attended by political leaders including Prime Minister Liz Truss, who was only appointed into the role earlier this week.

The Proclamation of Accession was signed by a number of dignitaries, including Lord President of the Council, Penny Mordaunt, and Scotland’s First Minister Nicola Sturgeon.

Prince Michael of Kent, Birgitte, Duchess of Gloucester, and Prince Edward, Duke of Kent, were seen together as the Principal Proclamation was read from the balcony.

The Band of the Coldstream Guards saluted the proclamation.

Outside, members of the public listened to the proclamation.

Gun salutes took place in Hyde Park and above at the Tower of London, as the Principal Proclamation was read.

A second Proclamation was read at the Royal Exchange in the City of London. State Trumpeters led a procession which included the Lord Mayor as well as various City officers.

Officials and elected members of the City of London Corporation doffed their hats.

Following the ceremonies, King Charles III returned to Buckingham Palace. His coronation may not be for many months yet – some 16 months passed between the death of Queen Elizabeth’s father and her coronation in June 1953.

DISCLAIMER: The Views, Comments, Opinions, Contributions and Statements made by Readers and Contributors on this platform do not necessarily represent the views or policy of Multimedia Group Limited.
Tags:
Britain
Duke and Duchess of Wales
Harry and Meghan
Kate and William
King Charles
King Charles III
Prince William and Kate
Queen Elizabeth II