In pictures: Tears flow as murdered nurse applicant’s body arrives in her hometown 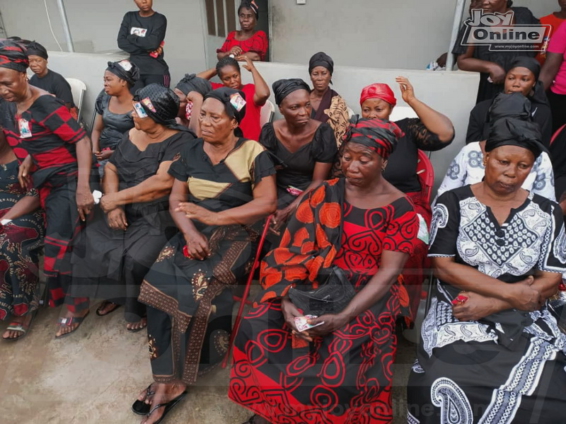 Hundreds of people at Yeji in the Bono East Region have thronged the family home of Georgina Botchwey, the aspiring nurse trainee who was murdered in Mankessim.

The victim is alleged to have kidnapped, sexually assaulted, killed and buried in an uncompleted storey building for ritual purposes.

A self-styled pastor, Michael Darko, and the Tufuhene of Ekumfi Akwaakrom, Christopher Ekow Clark Quansah were subsequently arrested in connection to the crime and remanded into police custody.

Per customs, the police have released Miss Botchwey’s body to her family and it was transported back to Yeji in the Bono Region for burial.

Upon her return, mourners have taken to the home of the deceased to mourn her death.

According to police reports, Miss Botchwey arrived in Cape Coast on Thursday, September 8, to seek admission to the Ankaful Psychiatric Nursing School.

She called the pastor and informed him about his presence in the Central region and her mission.

The self-styled pastor who was the boyfriend of the sister of the deceased, informed her he will pick her up after the interview.

Unbeknownst to the deceased, the pastor had connived with the chief who is the Tufuhen of Ekumfi Akwakrom to kidnap and sexually assault her.

The two suspects then killed her and buried her in the kitchen of one of the chief’s apartments.

DISCLAIMER: The Views, Comments, Opinions, Contributions and Statements made by Readers and Contributors on this platform do not necessarily represent the views or policy of Multimedia Group Limited.
Tags:
Georgina Botchwey
Mankessim Murder