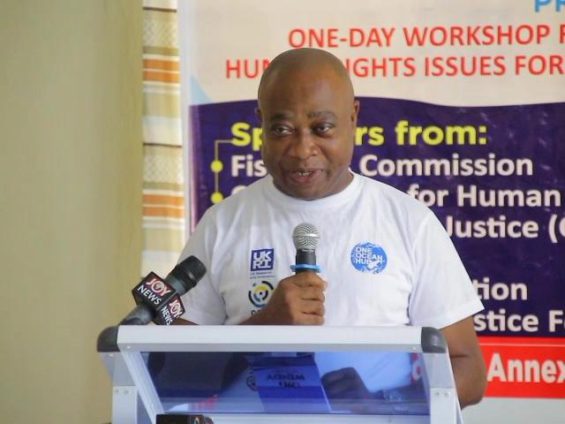 Experts in climate change, fisheries and human rights under the ‘One Ocean Hub Ghana’ are calling on policy makers in the country to ensure that the voices of those whose lives depend directly on the ocean are incorporated in policies that govern the ocean.

Country Director of ‘One Ocean Hub Ghana Project, Prof. Benjamin Kofi Nyarko, believes a departure from the top-bottom approach type of ocean governance would help a great deal with the dwindling marine life and to some extent reduce the impact of tidal waves that occasionally rock some coastal communities.

The experts have been addressing a day’s awareness creation forum for women in selected small-scale fisheries in the Central Region.

Prof. Kofi Nyarko stated: “the One Ocean Hub brings together researchers to help us have an interdisciplinary research in order to understand the ocean in a holistic manner and also to have evidence-based research so that it could be inputted for policy purposes.”

The day’s awareness forum was to build the capacity of fish processors and fishmongers in two communities in Gomoa West and Efutu in the Central Region to network and join forces to voice their problems to make it stronger for the government and other institutions who make policies to address them.

“The policy-makers expect the fisherfolk to swallow whatever policies they have put forward without considering their thoughts, believes and challenges. They don’t incorporate the various aspects which the fisherfolk are used to. There are various intangibles which could into the fashioning of policy and so the policies are always vague because they weren’t consulted,” he said.

Law lecturer at the University of Cape Coast, Dr. Bolanle Erinosho, explained why the intervention of the One Ocean Hub was particularly important. She says it was important to involve the community folk in the fishing areas in order to deal with the climatic change issues and also to deal with its associated human rights issues.

Zonal Director of the Fisheries Commission, Kwame Damoah explained that the low involvement of local communities in fisheries management planning and decision making demanded co-management of the ocean.

The One Ocean Hub, is a Global Organization, led by the University of Strathclyde Glasgow in the UK with 18 partner organizations, aimed at seeking the transformation of the urgent challenges facing the Ocean, influencing decisions and practices that shape the future of the ocean promote sustainability and justice.

DISCLAIMER: The Views, Comments, Opinions, Contributions and Statements made by Readers and Contributors on this platform do not necessarily represent the views or policy of Multimedia Group Limited.
Tags:
Climate change and fisheries experts
Country Director of ‘One Ocean Hub Ghana Project
Ocean governance
Prof. Benjamin Kofi Nyarko