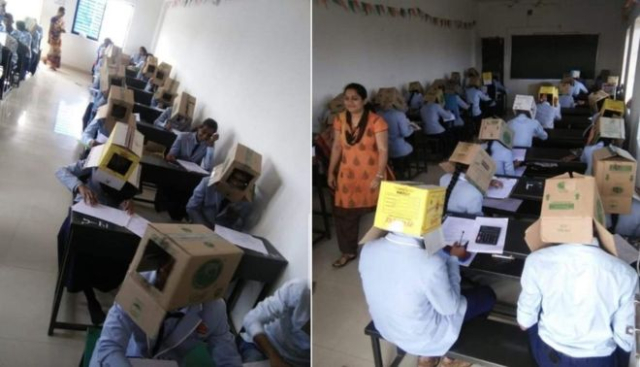 An Indian school official has apologised after a bizarre set of images went viral showing students wearing cardboard boxes on their heads.

The images were taken during a chemistry exam at Bhagat Pre-University College in Haveri, Karnataka state.

They showed students wearing boxes, cut open on one side, to prevent them from being able to copy other people’s work.

A junior college administrator has spoken publicly and apologised to district officials for the incident.

MB Satish told BBC Hindi he was sorry for trying to use the unusual anti-cheating technique.

He said the school has only implemented the measure on an “experimental basis” after hearing of its use elsewhere. 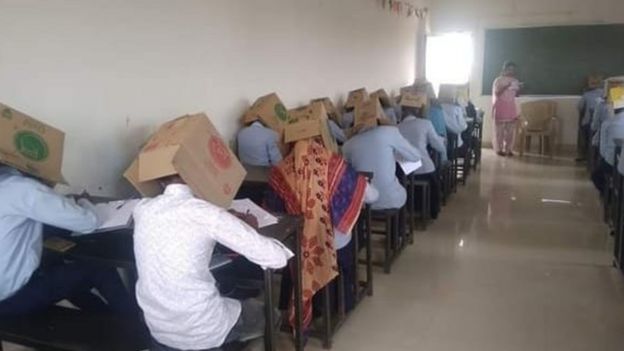 He also insisted it had been done with the students’ consent – in fact they had brought in their own boxes.

“There was no compulsion of any kind. You can see in the photograph that some students were not wearing it,” he said.

“Some who wore it removed it after 15 minutes, some after 20 minutes and we ourselves asked them to remove it after one hour,” he said.

Regional officials reportedly rushed to the school to complain as soon as they were made aware of the images.

SC Peerjade, deputy director of the local pre-University Education Board, described the practice as “inhumane”.

“When I got a message on this, I immediately went to the college and ordered the management to stop the practice,” he was quoted by the Times India as saying, “I also issued a notice to the college management and am contemplating disciplinary action against them for implementing this idea.”

School officials have said they have ceased the practice and are co-operating with the school board’s directive.