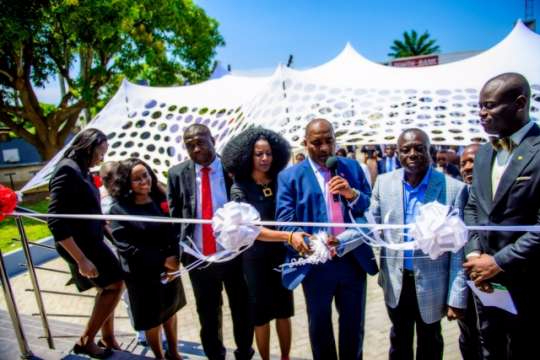 The CEO of Capital Bank says the strides the bank is making is an indication that indigenous firms can grow to compete in the world with the right leadership, enabling environment and support from the relevant stakeholders.

Speaking at the officially commissioning of a new branch at Labone in Accra, Wednesday, Fritzgerald Odonkor spoke about the giant strides the Bank is making three years after acquiring its universal banking license.

“Despite these strides, we are not resting on our laurels, because we believe that the bank is only taking the basic steps in our steps to growing into a world-class bank with its footprints in Africa and the rest of the world,” Rev Odonkor said.

He added that this is part of a strategic goal of the bank becoming a tier one bank by 2020.

The new branch, which brings the bank’s total number of branches to 19, is in its effort to deepen its presence across the nation.

Rev. Odonkor said part of their growth strategy has been revitalising the brand with a renewed vision to become the local bank of excellence for the African market.

As part of this renewed vision, the bank is rolling out contemporary branches, which are world class in terms of visual appeals, as well as communicating their strong African identity.

This year the Bank refurbished its Osu branch to an ultra-modern bank on the Oxford Street and with the regulatory approval; Capital Bank is looking at expanding its branch network to 22 by the end of 2016.

They are expecting to add three more branches at East Legon and Achimota both in Accra as well as Harper Road in Kumasi.

The CEO said it is in the move to make the brand of choice for customers that they have strengthened executive leadership and enhanced their human capital to respond to customers needs.

He disclosed that Capital Bank has streamlined their operations to the unique needs of their customers.