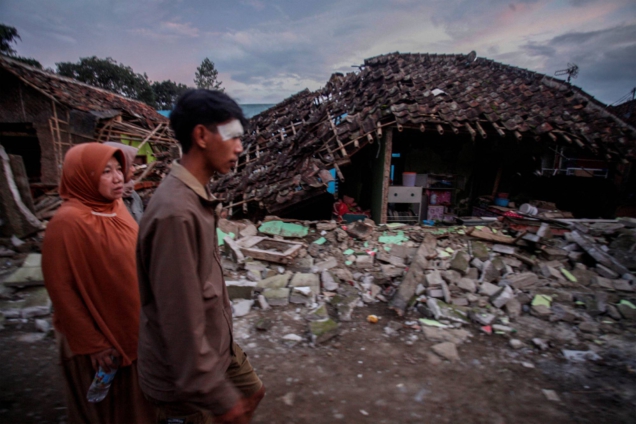 Locals walk past collapsed houses, after earthquake hit in Cianjur, West Java province, Indonesia, November 21, 2022, in this photo taken by Antara Foto. Antara Foto/Yulius Satria Wijaya/ via REUTERS ATTENTION EDITORS - THIS IMAGE HAS BEEN SUPPLIED BY A THIRD PARTY. MANDATORY CREDIT. INDONESIA OUT. NO COMMERCIAL OR EDITORIAL SALES IN INDONESIA.

An earthquake on the main Indonesian island of Java has killed scores of people and injured hundreds, say officials.

The 5.6 magnitude quake struck Cianjur town in West Java, at a shallow depth of 10km (6 miles), according to US Geological Survey data.

Scores of people were taken to hospital, with many treated outside.

Rescuers have worked through the night to try to save others thought to still be trapped under collapsed buildings.

The area where the quake struck is densely populated and prone to landslides, with poorly built houses reduced to rubble in many areas.

Speaking to local media, Mr Kamil said some 326 people had been injured in the quake, noting that “most of them sustained fractures from being crushed in ruins”.

But he warned some residents remained “trapped in isolated places” and said officials were “under the assumption that the number of injured and deaths will rise with time”.

The West Java governor added that more than 13,000 people had been displaced by the disaster, and the BNPB said more than 2,200 homes had been damaged by the quake.

Herman Suherman, the head of administration in Cianjur town, said most injuries were bone fractures sustained from people being trapped by debris in buildings.

“The ambulances keep on coming from the villages to the hospital,” he was quoted by AFP news agency as saying earlier in the day. “There are many families in villages that have not been evacuated.”

Many of the injured were treated outside in a hospital car park after the hospital was left without power for several hours following the quake, West Java’s governor said.

On Monday night, Mr Kamil wrote on Twitter that it could take up to three days for power to be fully restored to the area. He added that mobile phone reception remained poor and was causing “a lot of problems” for officials.

The tremor could also be felt in the capital Jakarta about 100km away, where people were evacuated from high-rise buildings.

Office workers rushed out of buildings in the civic and business district during the tremor, which started at 13:21 Western Indonesian time (WIT) on Monday, the agency said.

“I was working when the floor under me was shaking. I could feel the tremor clearly. I tried to do nothing to process what it was, but it became even stronger and lasted for some time,” lawyer Mayadita Waluyo told AFP.

An office worker named Ahmad Ridwan told news agency Reuters: “We are used to this [earthquakes] in Jakarta, but people were so nervous just now, so we also panicked.”

Earthquakes are common in Indonesia, which sits on the “ring of fire” area of tectonic activity in the Pacific. The country has a history of devastating earthquakes and tsunamis, with more than 2,000 killed in a 2018 Sulawesi quake.

DISCLAIMER: The Views, Comments, Opinions, Contributions and Statements made by Readers and Contributors on this platform do not necessarily represent the views or policy of Multimedia Group Limited.
Tags:
Indonesia
Java