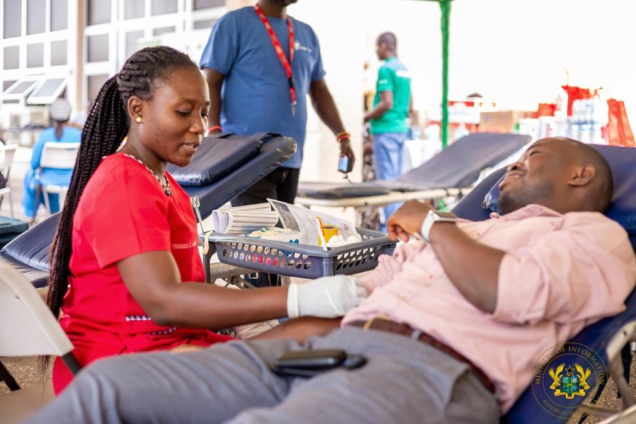 The Ministry of Information together with its press pool have donated 68 pints of blood to complement stock at the National Blood Bank.

The exercise which was the second time in a row brought together staff, members of its press pool and other members of the general public to shore up supply at the Blood Bank.

The Deputy Minister for Information, Fatimatu Abubakar in her opening remarks said that the exercise was in response to urgent calls by the Blood Bank to stock up after the COVID-19 and its corresponding restrictions on movement affected mass donation of blood.

“I am impressed that my colleagues in the press pool, in addition to the staff of the Ministry of Information, Information Services Department and other volunteers responded to the call of the National Blood Bank and came in their numbers to participate in stocking the Blood Bank”, she said.

The Deputy Minister was excited about the turn out of event and thanked the media personnel, staff and volunteers who availed themselves to donate blood.

She lauded the Ministry for the initiative and called on other Ministries, Department and Agencies to follow suit.

The Head of Communications of Stanbic Bank Ghana, Mr. Kojo Larbi was delighted that his outfit came through to support the exercise to make it a success.

He said the exercise is a laudable one and as such Stanbic Bank is more than happy to partner the Ministry in future exercises of this kind.

For his part, the head of Corporate Affairs at the EXIM Bank Ghana, Mr. Richard Anane Osei, said the success of the exercise showed how much we can achieve as a collective entity if we bring our hands on deck.

He mentioned that the EXIM Bank Ghana would continue to lend a helping hand anytime it is called upon to make sure events like this become successful.