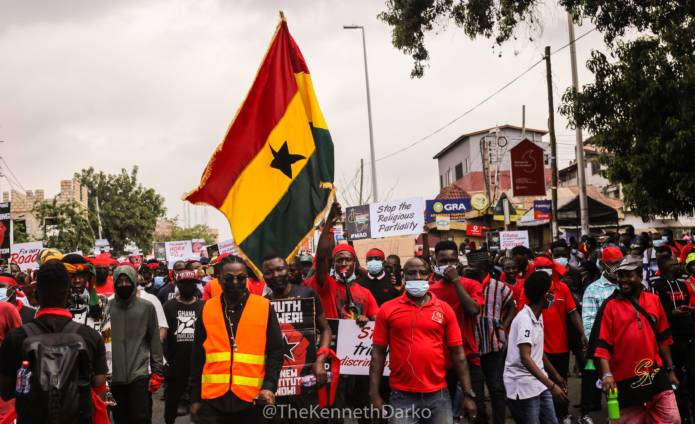 2021 was a challenging year for Ghana following the various incidents of public order and safety that sprung up with some strongly dominating the airwaves at certain points in time.

One noticeable observation in 2021 was the nature or form of demonstrations and protests in 2021. Social media was widely recognised, accepted and used. The #FixTheCountry Movement set the pace with their hashtag #FixTheCountry.

The Government had to counter the Movement’s hashtag on social media following the traction this new development was gaining and hence making the Government uncomfortable.

An IntelAfrique assessment highlights the findings of public order and safety and what various stakeholders need to do in 2022 and beyond to quell the frequency and intensity of these incidents.

A total of 32 threats and actual incidents of public order were highlighted;

The breakdown includes 8 threats and 24 actual incidents of public order.

Of the total of 32 threats and actual incidents;

Of the 8 threats of public order;

The reasons for the various demonstrations were broadly classified into three:

Socio-economic – 1 out of every 5 incidents of public disorder in Ghana is as a result of socio-economic reasons (ie 18.75%)

Socio-political – 1 out of every 4 incidents of public disorder in Ghana was as a result of socio-political reasons (8 cases, representing 25%)

Considering the above, there is the need for all stakeholders to effectively play their roles in ensuring public order and safety in Ghana in 2022. It has been observed that labour agitations as a result of unfavourable remunerations and poor conditions of service were dominant in 2021. As a result, more attention should be directed at ensuring an enabling good working environment to foster proper human capital development and economic growth.

The following recommendations are highlighted below:

Labour expert Austin Gamey has indicated that poor salary administration is the reason for the many perennial strike actions Ghana experiences. The Fair Wages and Salaries Commission should proactively solve all challenges associated with the Single Spine Salary Structure to measure output and guide remuneration packages in accordance with the tenets of the Labour Act 651, Section 98.

The National Labour Commission (NLC)’s role in mediating grievances of labour groups or public sector workers is more reactionary than proactive. Considering the many grievances at hand, there is the need for the Commission to show more “concern” and gradually bring the various aggrieved labour groups to the table and forge a way forward for a lasting solution than wait for things to blow up before negotiating with them.

Development partners should increase their support to the Formed Police Unit with enhanced and increased capacity building in crowd and riot control and equipment.

All enquiries concerning this release should be directed to Charles Okyere, Team Lead for Risk, at charles@intelafriquegh.com