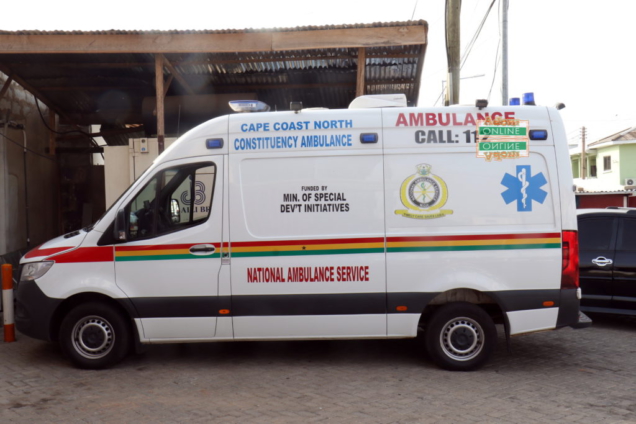 The Ranking Member on Parliament’s Health Committee, Kwabena Mintah Akandoh is demanding the immediate interdiction of an ambulance crew in the Western Region whose negligence led to the death of a 31-year-old nursing mother.

According to the Juaboso MP, the circumstances leading to the death of the nursing mother who was being transferred from Takoradi to Accra on referral, leaves much to be desired.

The deceased, Augustina Awortwe, allegedly lost her life last week due to a delay in the movement of the ambulance to Accra after doctors referred her from the Holy Child Clinic at Fijai, to the Korle-Bu Teaching Hospital for further treatment.

Husband of the deceased, claims the delay was occasioned by his inability to cough an amount of GH¢600 being demanded as cost of fuel for the ambulance.

Speaking to the media after a visit to the family and the Holy Child Clinic on Wednesday, January 12, 2021, Mr Mintah Akandoh also called for a full-scale parliamentary probe into the mysterious death of the lady.

“I don’t want to pre-empt any investigation, but it is not the best. I don’t think that anybody deserves to lose their lives when they are going to give birth. The story is bizarre, and so we have to get back into Parliament and commence a probe of the whole issue. They are not supposed to pay anything [to ambulance drivers] so if as a country we want to make ambulance cash and carry, we should say so, so that before anybody calls the ambulance service, he or she knows that you must pay for the services of the ambulance.”

“There are more questions than answers that have been provided so far. So, for me, even at this hour if the ambulance driver and the crew are interdicted pending investigation that won’t be bad at all,” he said.

Meanwhile, the husband of the deceased, John Obiri Yeboah, who narrated his ordeal at the hands of the ambulance crew says he is devastated by the turn of events.

“I gave GH¢50 demanded of me to the ambulance driver to buy fuel, and after they bought the fuel, one of the officials told me we had to return to Fijai. When we got to Fijai there was an altercation between the officials and the hospital and all along my wife was helpless in the hospital.

“It was while we stood at the Cape Coast hospital entrance that one of the men came to tell me I have lost my wife. When I checked the time they said she died, it was the same time one of the officials told the driver to go and stake lotto. Later they told me the ambulance is not used to convey dead bodies,” he added.