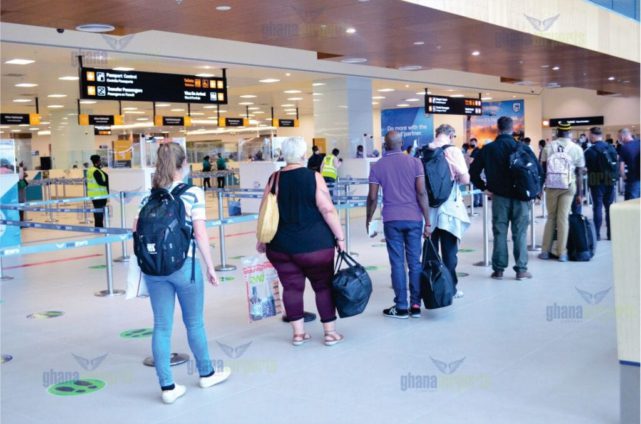 International passenger arrivals into the country surged significantly in the second quarter of the year, as 131,905 tourists entered the country, compared with 4,583 visitors during the same period last year

According to the latest Bank of Ghana’s data on Economic Activity, international passenger arrivals during the second quarter went up by 33.3% compared with 98,950 visitors received in the first quarter of this year.

This sharp year-on-year increase in tourist arrivals was due to the easing of travel restrictions over the review period.

Also, economic activities at the country’s two main harbours -Tema and Takoradi, as measured by as measured by laden container traffic for imports and exports, recorded an improvement during the second quarter.

The relative improvement in port activity, according to the Central Bank, may be attributed to an up-tick in international trade as global Covid-19 restrictions eased during the quarter.

According to the Bank of Ghana, industries utilised 799.19 gigawatts of power in the second quarter of 2021, as against 650.84 giga-watts recorded for the same period in 2020.

Industrial consumption of electricity also increased by 8.0% from 740.19 giga-watts utilised for the first quarter of 2021. The relative improvement in the electricity consumed by industries could be attributed to increased industrial activity during the review period

Conversely, the number of vehicles registered during the review period decreased by 30.1% relative to 96,093 vehicles recorded in the first quarter of 2021.

The comparative improvement recorded in vehicle registration was due to an increase in vehicle importation during the quarter.

Conversely, total cement sales during the review period declined marginally by 0.5% when compared with 1,062,902.24 tonnes recorded during the first quarter of 2021.

The relative improvement in total cement sales, according to the Bank of Ghana was due to an uptick in construction activities during the review period.