Inusah Fuseini yet to honour CID’s invitation over Mahama comments 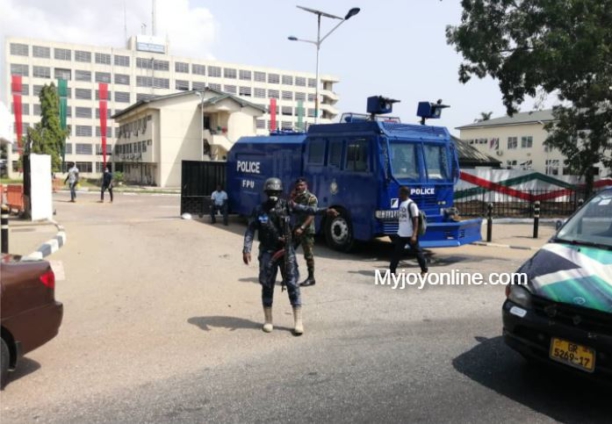 Security beefed up at CID headquarters ahead of Inusah Fuseini's appearance

Member of Parliament for Tamale Central, Inusah Fuseini is yet to appear at the Criminal Investigations Department (CID) of the Ghana Police Service, officials say.

On Wednesday, the legislator was invited over some pronouncement he allegedly made on Pan African Television.

“I have said and I have advocated that the National Democratic Congress (NDC) flagbearer, John Dramani Mahama and former President of the Republic of Ghana declare himself President and forms a parallel government,” he is alleged to have said.

In a letter addressed to the Speaker of Parliament, the CID’s Director-General, COP Isaac Ken Yeboah stated that the police is probing the case and will need the Tamale Central legislator to assist in investigations.

But according to the Head of Public Affairs at the CID, DSP Juliana Obeng the courtesy extended to the MP has so far not being honored.

“We expected to see him at about 10 am this morning. As you speak to me right now we do understand that he still has not reported. We’re still waiting for him to come,” she told JoyNews‘ Kwesi Parker-Wilson Thursday.

The Police CID spokesperson further indicated that they have not received any explanation as to the reason behind the MP’s delay.

Meanwhile, security has been beefed up at the premise of the Police CID headquarters ahead of the MP’s appearance.