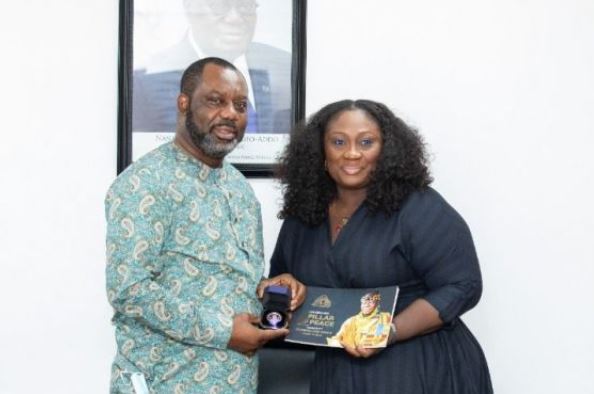 The Minister of Energy, Dr Matthew Opoku Prempeh, has urged Ghanaians to invest in the Otumfuo Commemorative Gold Coin when it goes up for sale to the public at all branches of the Access Bank from April 4, this year.

He explained that gold is of high value, and it is against this background that the commemorative coin had the official authorisation to enable people invest in it.

Dr Opoku Prempeh made the call when he was presented with the commemorative gold coin at a brief ceremony in his office last Tuesday.

“We are looking forward to you selling the gold coin so that we can also purchase some,” Dr Prempeh told the delegation from the E ON 3 Group that called on him to present the coin.

He added: “ It is always good to store your money in that [gold] and I will encourage every able Ghanaian willing and with the resources to have this value stored for you.”

“You buy it today and I’m sure in five years it is going to appreciate in value,” he stated.

He commended the E ON 3 Group for doing a remarkable job by taking the coin to a number of personalities in the country including the President, the Vice President and other statesmen.

The Minister said the honour of presenting the gold coin attested to the value the nation placed on the contribution of Otumfuo Osei Tutu to national development.

He said the symbol of peace inscribed on the coin was touching.

“Thank you for putting your good name on a good cause,” Dr Prempeh told the E ON 3 Group and its partners.

Dr Opoku Prempeh said it was significant that the President as well as surviving past Presidents spoke positively of the roles Otumfuo played in national development.

For his part, he recalled an intervention Otumfuo Osei Tutu made in getting the World Bank to reverse a decision to cancel two major educational projects when the NPP assumed the reigns of power in 2017.

According to Dr Prempeh, the two projects – the Ghana Accountability for Learning Outcomes Project (GALOP), which is a five-year project with the objective to improve the quality of education in low-performing basic education schools and strengthen education sector equity and accountability in Ghana, and the Jobs and Skills Project, which seeks to support skills development and job creation in Ghana, came under threat as the World Bank Group decided to cancel the projects.

“This is the extraordinary traditional ruler we are celebrating through this commemorative gold coin,” he said.

Taking a journey back into history, Dr Prempeh said the tradition of Asante had moved from warmongers to peacemaking, and from the battlefield to the classroom.

“From Prempeh I to Opoku Ware II to Osei Tutu II, the battle cry has been education,” he stated.

Dr Prempeh further added that the traditional relationship between the Gbewaa Palace and the Manhyia Palace was well established.