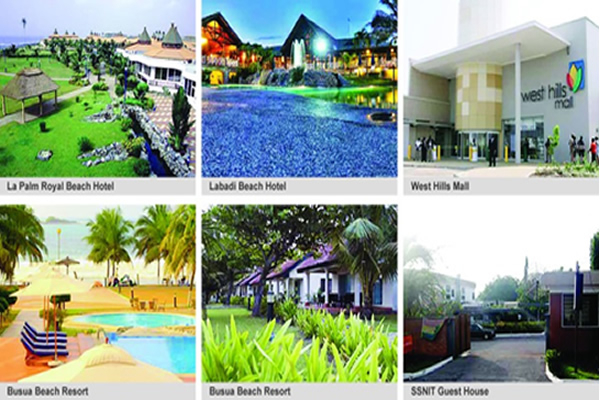 This publication reflects on what their information is not saying. For instance, as of September 2018, the Trust has still not published its Annual Report for 2016 and 2017. It is not clear why the annual reports are delayed but it would be interesting to know the External Auditor’sopinion on the accounts in the reports.

Also, this publication would throw light on what SSNIT has not yet disclosed to the public. Hence answers to the following questions will assist in establishing whether SSNIT is wasting funds on real estate investments or not.

In total, as at December 2017, SSNIT’s real estate portfolio was valued at GH¢1,735.90 million which is just under US$400million. According to the Trust’s recent report, from 2013-2017, the sale and rental income had on average, contributed about 6.1% to the Trust’s gross investment income. Though SSNIT’s published documents and physical structures suggest performance is satisfactory, we cannot take it on face value. Considering the size of the capital investment and the fact that there are no benchmark figures to compare with, one wonders whether after applying the effects of inflation and depreciation, it can be concluded that the reported returns on investment are adequate.

The concern one has is how SSNIT decides which project to back or not to back. In a SSNIT press release dated 11th October 2017 the public was informed that the Ministry of Works & Housing was seeking collaboration with SSNIT to complete 2,543 units of flats at Borteyman and Asokore-Mampong. Indeed these abandoned houses from President Kuffour’s era need to be completed urgently for people to occupy. But could the SSNIT Board and Director General (DG) refuse to support these projects? Or given the choice would the DG prefer to inject funds into an alternative project instead of the housing schemes? Decision made with regard to proposed projects should never be based on political consideration but rather on its economic viability.

Furthermore in terms of sustainable development which previous housing schemes are now becoming like the famous Kaiser Flats in Tema? In recent months SSNIT has also been forced to reduce the prices of the Borteyman properties to facilitate the sale. Were these properties sold at a loss? Others too have also raised questions about why only particular private companies were awarded real estate development contracts. Unconfirmed reports also suggest Economic & Organised Crime Office (EOCO) is investigating some projects of the Trust, involving a number of consultancy firms. All these indicate the procurement of SSNIT real estate investment is facing challenges and therefore needs a more focused attention.

In principle, if the real estate investment is profitable it will be recommended a bold action is taken to strengthen the programme or spin it off as a new commercial entity with an independent management structure. This could one day become Ghana’s first publicly listed company on an international stock exchange. The new entity will be set up under a new legislative framework to provide better safeguards and with the mandate to expand programme across the country. It will also have the freedom to vigorously engage in commercial activities to champion the next phase of Ghana’s economic development.

The physical structures developed so far demonstrate the real estate investments have great prospects. But as to whether it is profitable or the Trust is wasting our money will require further investigation to ascertain an agreed benchmark to measure future performance.

Profile: Kwadwo Owusu-Darko is an architect but specialises in Housing. He has over 20yrs experience in real estate development, regeneration and housing management in the UK. He was a Director and Board Chairman of two Housing Associations. Currently working towards setting up a think tank to support Housing development in Ghana.Email: owudarko@gmail.comPost Comments @Blog:https://owudarko.wixsite.com/website