It has a swimming pool: 4 men build big fine house in village using only mud - MyJoyOnline.com

It has a swimming pool: 4 men build big fine house in village using only mud 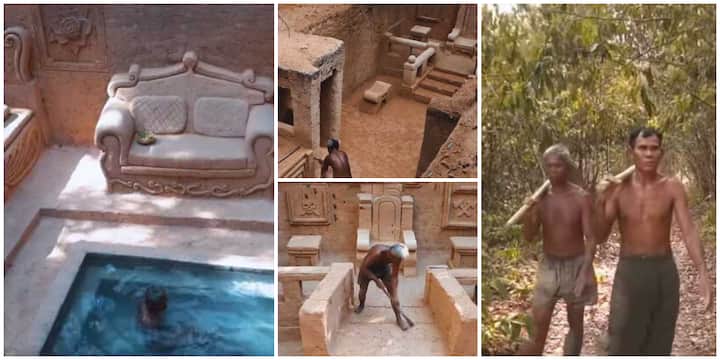 It has a swimming pool Photo Credit: Screengrabs from video shared by Nas Daily

Four talented men from Cambodia have taken making items with mud to a new height entirely – they built a big house using only mud.

Nas Daily shared a video on Facebook of the incredible village mud house that has a swimming pool, sofa and other household items made with only clay.

Speaking with Nas Daily, a man identified as Molly said he noticed the creative works of the Cambodians and sought to bring their special handy talents to the world by featuring their works consistently on YouTube.

Molly, a builder who is resident in Cambodia, added that he found clay builders who reside in the jungle and would give them building plans to which they brought to reality using mud.

The four men are talented at digging clays using special locally-made tools to create shapes and objects on the ground.

Their creations have become tourists attraction

Creations as the big mud house usually take them up to a year and cost thousands of dollars to build.

The houses they build are however not habited by humans but abandoned dogs and puppies and are tourists destinations.

Molly noted that unfortunately, the clay houses they build, last for up to a year, after which they get destroyed either by rain or natural causes.