It is better he stays at Roma than join Black Stars for AFCON - Afena-Gyan's scout - MyJoyOnline.com 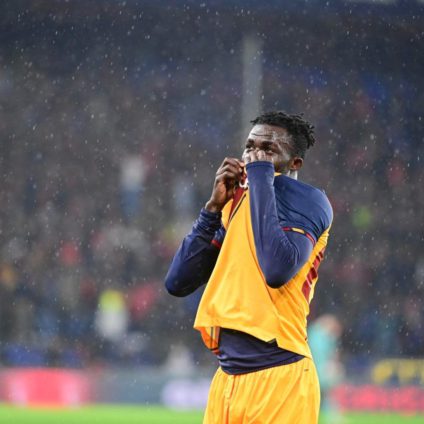 Marcel Veerman, a Holland football scout who brokered Felix Afena-Gyan’s move from Ghana to Italy’s AS Roma, is against the idea of having the 18-year-old striker joining the Black Stars for AFCON 2022.

Early in November, Afena-Gyan turned down his debut invitation from the senior national team for Ghana’s World Cup qualifying games versus Ethiopia and South Africa.

The invitation came after the striker made his debut for AS Roma versus Cagliari in the Italian Serie A. Afena-Gyan explained the need for self-development as his decision to refuse the invitation.

“I thought it was important for me to stay in Trigoria to accumulate training under Mourinho’s orders to continue improving and growing,” Afena said.

Afena-Gyan scored his debut Roma goals after coming off the bench versus Genoa. His two goals ensured that Mourinho’s Roma picked up all three points.

The teenage striker defied all odds and moved directly from high school football to professional football with AS Roma. Sebastian Annersen, a member of the team which scouted the teenager revealed that he displayed raw and unneglectable talent.

“It was just before covid. It was a small tournament organized by one of our partners and very soon already, I saw it. Of course he has a beautiful athletic body, he was moving with great energy but he also has the touch, the calmness on the ball, his finishing was good.

“He scored a easy penalty but he played against another central defender who we also liked. And he [Afena-Gyan] was scoring and really beating him on the left side and the right side, and we were both thinking straight away and told our partners ‘wow, this is a special one’,”Annersen told JoySports in an interview.

Irrespective of the talent and potential he possesses, fellow scout, Veerman suggests it is still quite early for the teenager to join the fold of a Black Stars team looking to end a 40 year trophy drought. He believes the player’s development is the most important key at this time.

“He just came and I know this player needs to stay for January when Ghana goes to the African Cup. For me in my opinion, it is better he stays in AS Roma, he gets time to play and builds up his career. When he goes to the Africa Cup, he needs to play, he needs to have minutes. But this tournament Ghana have so many good players, so many experienced players who can play now. So he [Afena-Gyan] needs playing time.

“He is young [and] will get his time in the national team but now he must think to build up his career because he’s played only 15 minutes, and scored two goals, yes but he needs to play 90 minutes and from my experience, it is best he stays at Roma for this African Cup,” Veerman said to JoySports in an interview.

However Ghanaians eager to see the Black Stars sort out its goal scoring issues and lift the AFCON title in Cameroon, disagree with Veerman.

The last time a striker scored for the Black Stars was in March, via a Jordan Ayew penalty.

In an interaction with JoySports, some are hoping to see the teenager join the senior national team squad for Cameroon.

“I think he did well over the weekend and we hope for the best for him so that he can join the Black Stars for our next callup.”

“If he is 18 years and is doing the work, what is wrong with inviting him to join the Black Stars? I heard so many arguments that he needs to be playing to get ‘fit’ before joining the team, but I don’t think that is the debate now. We desperately need a striker to do the work for us and if its a young guy and he has started scoring goals, I don’t think we should wait. Let’s get him on board.”