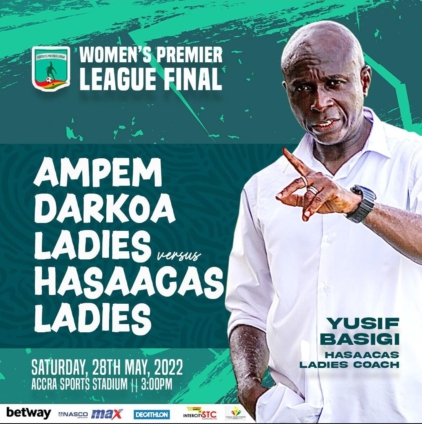 Head coach of Hasaacas Ladies, Yusif Basigi is confident of winning yet another Women’s Premier League title ahead of Ampem Darkoa Ladies when they pair face each other over the weekend.

The two teams will face off in a repeat of last season’s final at the Accra Sports Stadium on Saturday, May 28, to determine the champion of the 2021/22 season after respectively winning their zones.

Last season, the Hasmal Ladies recorded a 4-0 win over their arch-rivals to lift the title and Basigi is hopeful of replicating their success.

Hasaacas Ladies recorded no defeat in their 18 games in the Southern zone, ending the regular season with 49 points.

Speaking on his approach to the final, the Hasaacas Ladies gaffer said: “To us, it is going to be a ceremonial match but that is not to say we are underrating them but we are going to present the trophy on the day and take it back to Takoradi. Not forgetting that no matter the tough opposition that they will pose with the very good experienced players at their disposal, we also have the same and that is going to make the final interesting.”

Basigi also revealed that his side remains keen on maintaining their unbeaten record this campaign.

“We are running the whole year unbeaten and with that in mind, I can promise that we are poised to finish off any team that comes our way even though the year has not ended yet. This match and other subsequent matches that is the FA Cup final are no exception,” he added.

The game is scheduled to kickoff at 15:00 GMT at the Accra Sports Stadium. The winner will also get the