It was a difficult decision, but I took the challenge – Prof. Esi Sutherland on Rawlings’ legacy 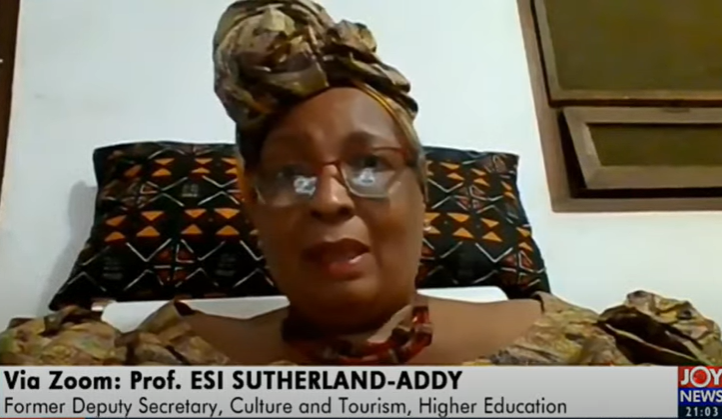 Prof. Esi Sutherland-Addy disclosed that her appointment came through the recommendation of Dr Mohammed Ben Abdallah, a good friend and colleague of hers.

“It was during the era when a very good friend, Dr Ben Abdallah, had been appointed as the Secretary for Culture and Tourism and he warned me that he was going to ask for me to come and support him after he’d been there for a little while”.

However, at the time the appointment came, she had just had a baby and was unprepared for the new role. She was also concerned about leaving her work at the University of Ghana.

“I had just had a baby and so on so I said no, I really can’t do this right now so they should give me a chance to think about it.

The Professor further disclosed that her soon-to-be-boss, however, was running out of patience with her.

“After a while, Chairman Rawlings was asking ‘who was this woman who kept giving excuses?’ So Dr Abdallah warned me that one of these days I was going to hear my name on the radio and one evening that’s what happened,” she said.

“Then I realised that I had to do this job,” she added.

“It was a difficult decision but at the end of the day, I took the challenge and went in to support,” she said.

During the interview on Joy News’ the Probe on Mr Rawling’s legacy, the Professor who was initially reluctant towards accepting her role went on to become the Deputy Minister of Higher Education under the Rawlings administration, a role she also took on with some hesitation.

“I went into Culture and Tourism, but very soon thereafter the ministries were changed, so Tourism was added to Trade and Culture was added to Education. We now had the Ministry of Education and Culture”.

Amid the agitation in the Higher Education sector caused by the economic reform that was going on at that time, she was appointed as the deputy minister.

“So there was a certain amount of agitation and it was decided that of all the deputies that were in education and culture, they decided on my behalf that I was the calmest person and persuasive and so on and so I should take that role”.

This, she said, made her cry as she felt she was being moved away from the field she was most comfortable with. Nonetheless, she gave it her very best.

“So that one, I certainly took up with a certain amount of reluctance, but then once I was volunteered, as it were, to take it up, I tried to do the very best that I could”.

According to her, she was glad to have contributed her quota to shaping and making reforms in her sectors such as the University Rationalisation Program and the Tertiary Education Reform program.

“Rawlings opened the door and gave us the opportunity to transform the country and for that, I’m really really grateful for the opportunity,” she said.