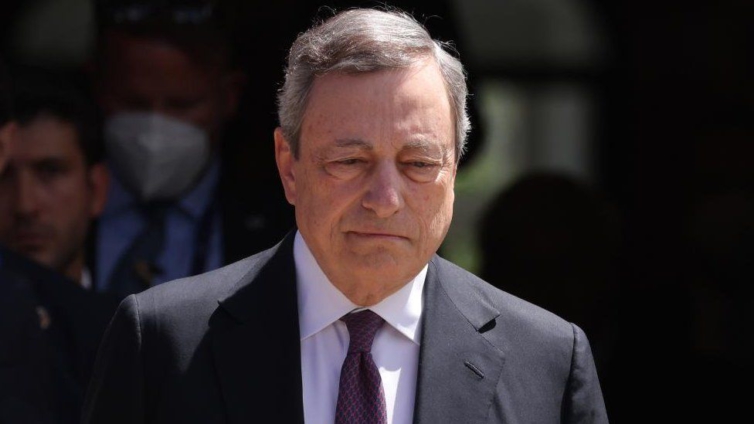 The former head of the European Central Bank has led a unity government since February 2021.

In a statement, he said the pact of trust that had sustained the unity government had gone.

However, the president refused to accept his resignation.

President Sergio Mattarella appointed Mr Draghi to lead Italy’s post-Covid pandemic recovery, and save the country from endemic instability. He has now called on Mr Draghi to address parliament to provide a clear picture of the political situation.

The effect of President Mattarella’s intervention is not entirely clear. Mr Draghi is expected to go to parliament next Wednesday – and with sufficient backing could remain in office.

The extraordinary developments in Rome capped a day of drama triggered when Five Star leader Giuseppe Conte refused to back the government’s €23bn (£19.5bn) package of economic aid for families and businesses, arguing Mr Draghi was not doing enough to tackle the cost of living crisis.

Even though the government comfortably won Thursday’s vote in the Senate with the help of other parties, the man dubbed “Super Mario” had warned repeatedly that without Five Star’s support the government could not continue.

Mr Draghi paid a first, hour-long visit to President Mattarella and, after reflecting on his future, issued his statement of resignation.

“Today’s votes in Parliament are very significant from a political point of view. The national unity majority that supported this government since its creation no longer exists,” he said. After addressing ministers he returned to the Quirinale palace to tender his resignation to the president. Avoiding the cameras, he did not use the main door.

Elections were already due early in 2023 and, if the government does collapse, a vote is likely to take place this autumn. Several parties on the right are keen on early elections, but a period of political uncertainty will jeopardise Italy’s efforts to tackle a looming energy crisis and pass next year’s budget to secure EU funding.

Right up to the Senate vote, attempts were made to resolve the coalition crisis. Milan’s stock market tumbled 3.4% as nervousness spread to investors in the eurozone’s third biggest economy.

Five Star was originally the biggest party in the coalition, but has seen a string of defections and falling support. Former party leader Luigi di Maio accused it of a cynical plan to bring down the Draghi government to revive its own support, while dragging Italy to economic and social collapse.

Parties across the political spectrum have had next year’s general election in their sights, especially on the right. Matteo Salvini of the far-right League and Giorgia Meloni of Brothers of Italy are competing for leadership of a potential right-wing coalition.

Politicians on the left are less prepared for elections and Democratic Party Secretary Enrico Letta said the focus now had to be on reconstructing a coalition in parliament so that the Draghi government could restart.

DISCLAIMER: The Views, Comments, Opinions, Contributions and Statements made by Readers and Contributors on this platform do not necessarily represent the views or policy of Multimedia Group Limited.
Tags:
Italy
Prime Minister Mario Draghi