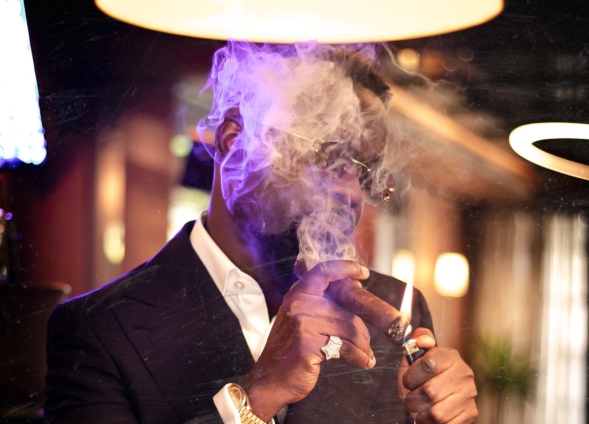 Rapper Sarkodie has described the call by Civil Society Organisations (CSO) on him, to apologize for holding a cigar, as disrespectful.

Speaking on Daybreak Hitz on Hitz Fm, Sarkodie explained that the display of cigars, in the photos that sparked the outrage, is a sign of celebrating his successes and achievements.

He stated that if the CSOs had some complaints they could have approached him with their concerns and possibly suggest a campaign to educate people against smoking.

“The only thing that blew me off is the fact that they expect me to apologize. It’s very disrespectful to say that. For me to come and apologize for holding a cigar? To who?” Sarkodie quizzed.

The rapper sparked some conversations on social media after he was seen holding a cigar in some photos shared on his birthday.

This photos triggered a reaction from some Civil Society Organizations (CSOs) who believed Sarkodie’s photos were not sending the right signal to the youth who follow him on social media.

In a press release they said, “we are very disappointed in Sarkodie for circulating pictures of himself smoking a cigar on social media without considering the negative influence this singular act stands to have on the public, especially the youth, most of whom consider him as their role model.”

The CSO’’s which include Vision for Alternative Development (VALD), the Ghana Non-Communicable Diseases Alliance (Ghana NCD Alliance), Media Alliance in Tobacco Control and Health (MATCOH), Jaishi Initiative, and the Community Health Support Team (CHEST) all believe that the award winning rapper has to render an apology.

However, the ‘Fa Hooki Me’ hitmaker believes he has is being targeted because of his influence.

Sarkodie admitted there are harmful effects that comes with constant smoking.

“What cigars represent in my world of entertainment is celebrating success and achievements. It took me a while to have the nerve to put it out because I know my people,” he explained.

The rapper is currently promoting his latest album titled ‘NO PRESSURE’ which features renowned American rapper, Wale and a host of other great artistes such as; South Africa’s Casper Nyovest, MOG Music, Darko Vibes, Kwesi Arthur and Vic Mensa.

DISCLAIMER: The Views, Comments, Opinions, Contributions and Statements made by Readers and Contributors on this platform do not necessarily represent the views or policy of Multimedia Group Limited.
Tags:
Cigars
Civil Society Organisations
No Pressure
Sarkodie