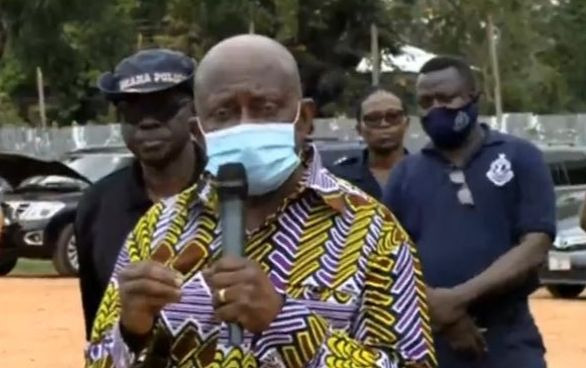 Ashanti Regional Minister, Simon Osei-Mensah says it is possible for Ghana to produce a Muslim President in the next election.

He says it is only the New Patriotic Party that has given the opportunity to Muslims to serve as Vice Presidents since 1992.

“Under former president JA Kuffour, we had the late Aliu Mahama and currently under President Akufo-Addo, we have Dr Mahamadu Bawumiah – both are Muslim,” he said.

The Minister says once the party is able to produce Muslim Vice presidents, there is a greater possibility to produce the first Muslim President.

Mr. Osei-Mensah was speaking at an event to donate 1,100 bags of cement and 21, 000 cedis to support the Effiduase Asokore Zongo Mosque Project.

A request was made by the management of the mosque for support to complete the extended facility to accommodate the growing number of Muslims in the area.

Dr. Bawumiah delivered on his promise to help in the completion of the mosque.

The regional minister personally donated 100 bags of cement and GHS1,000 to support the project.

Ashanti Regional Manager for Masloc, Hajia Zainab Sallow whose mother’s funeral the vice president attended and promised to deliver the cement, encouraged the youth in the community to change their pattern of voting in the next election.

Hajia Zianab believes the ruling government has done enough to change the lives of the youth in the area and therefore deserves their support.

“Vote for a party which will be able to help you,” she said, recounting the government’s job creation opportunities for the youth in the area.

She is optimistic things would change for the better in 2024.