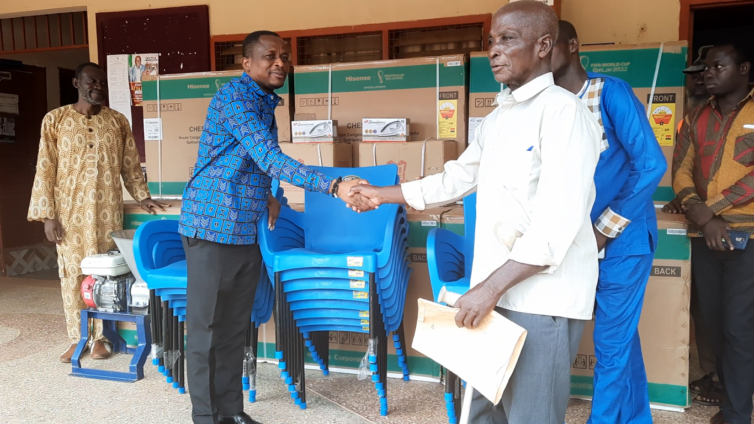 Persons with Disabilities in the Jaman South Municipality of the Bono Region have appealed to the government to increase the District Assembly Common Fund support from 3% to 5%.

The physically challenged persons believe such an increment, though not enough, would ease their burdens.

They appealed in Drobo when the Jaman South Municipal Assembly, led by the Chief Executive, Andrews Bediako, presented support items to 70 beneficiaries, including 42 females, at a cost of over 90,000 cedis.

The disbursed items include nine freezers, two sewing machines, six fufu pounding machines, and twenty plastic chairs to help them engage in meaningful ventures that would make them self-reliant.

Others benefited from health support, ranging from surgery -1, medications -17, reviews -2, referrals -3, and aid -1.

Andrews Bediako said the support is geared towards poverty eradication among the PWDs in the municipality.

“We are giving these items to them so that they don’t beg to feed themselves. They have brains just like every other human being and are capable of doing many things. Support like this would also help them to eat at home and feed their families”, he said, adding that earlier support has helped one PWD in the area who now manufactures sandals.

He, however, said monitoring their success or otherwise, every quarter is equally necessary. “Some take the support or items and sell them”, he noted. Nonetheless, he cautioned the beneficiaries that the Assembly would be monitoring their progress to ensure proper utilization of the items.

The Chairman for PWDs Federation in Jaman South, Charles Adjei Mensah, expressed their appreciation to the Assembly for coming to their aid since most of them do not work.

“If you give a physically challenged person a fridge, he/she can sell iced water and eat from the profit as well as maintain him/herself”.

”As for the 3% support from the Assembly’s common fund, we appreciate it, but if the government would give us 5%, it would go a long way to help more of our members”, he further appealed.

Mr. Adjei Mensah also bemoaned the lack of care for the physically challenged person by parents and society.

“We did not create ourselves, but God, in His Image. So we are appealing to the government and other persons and organizations who sympathize with us to care for us just like they do to our brothers and sisters who are not physically challenged”, he said.

He said this would make them happy. “If you neglect us, we would be further broken.

Kwasi Nketiah Omar, whose spinal cord has been affected due to an accident he had six years ago, requires the help of others to move around.

He expressed frustration about his situation making it difficult to continue to work and care for his two children –one of whom moves him around in his manual wheelchair.

He got a freezer from the Assembly to go into the cold storage business. Mr. Nketiah Omar appealed for financial support to stock the freezer with fish and meats to enable him to fend for himself and support his children’s education.